What is this yellow sticky substance Mulder puts in his vodka?

In The X Files Season 3, episode 13 "Syzygy" at approximately ~24:42, Fox Mulder is at a dingy motel and appears to be using a clumsy long metal spoon to attempt to put a thick yellow sticky substance from a dark brown cardboard canister into a mostly-empty bottle of vodka. 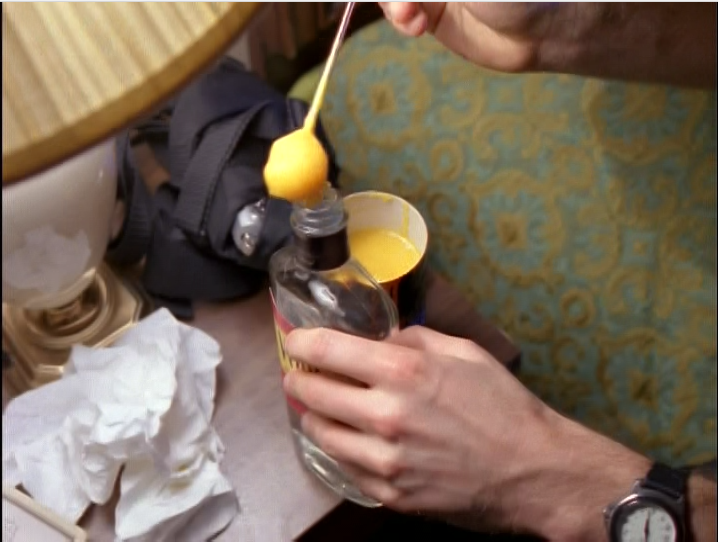 He then closes and shakes the bottle to mix the yellow substance with the vodka.

I presume this is some American product sold in hotels and, given that this episode contains a lot of references to odd behaviour which could be easily attributed to drug-taking, I hypothesized that it could possibly be an easily-obtainable substance with a known hallucinogenic side-effect when mixed with alcohol, but it seems odd that it would be in a can.

I also know that in parts of the American continent orange juice is sold in a can which is frozen, so he could be making a "Vodka Orange" but the consistency of the substance seems too thick and creamy and an extremely bright yellow.

What is this yellow sticky product they are depicting in this picture?

As mentioned by BrettFromLA, this is indeed Orange Juice Concentrate and he is mixing it with vodka. There are several recipes for such a slush cocktail if you google "orange juice concentrate and vodka" including this one from an X-Files fan which is based on the drink from the episode.

It is worth noting that this episode (Season 3 episode 13 "Syzygy") is one which depicts both Mulder and Scully behaving recklessly as they are being affected by the alignment of the planets. The idea being that the gravitational pull is so strong from this alignment that it causes the entire town to behave strangely.

10
In the season 8 finale of the X-Files, what is Alex Krycek's motivation in this scene?