What does Darth Vader think Obi-Wan's referring to when Obi says "If you strike me down..."

When Obi-Wan and Darth Vader are dueling, Obi-Wan says "If you strike me down, I shall become more powerful than you can possibly imagine" --

What does Vader think Obi-Wan is referring to? Vader obviously doesn't seem concerned by it, but does he give it any further credence or thought?

This is not a dupe of Why does Obi-Wan say that he'll become more powerful if Vader kills him? The questions are from completely different people/perspectives.

Vader probably has an awareness that the Force can extend someone's consciousness beyond death in a ghost-like form.

But he's not afraid of ghosts, they have no real power beyond words and cannot harm him or change his convictions.

But what Vader doesn't realize is that Obi-wan's continuing guidance and mentorship of Luke is the "power" that he's talking about. Vader, in this mode, is entirely self-absorbed and doesn't see this angle.

@Snow mentions the 'ghosts' that the Force allows for, but that Vader probably feels they're of limited threat to him. A martyr is a powerful figurehead though, but only if the "cult" around them is allowed to take root. This seems like the most likely explanation, given the depth of the Star Wars plots.

I seriously doubt the thought into the line went as deep as all this, but...

I wonder if, a person in Vader's position might be in a no-win scenario and really have no choice but to kill Obi-Wan. In some sense, Obi-Wan and co. have challenged the Dark Side, and by extension, Vaders authority. That Obi-Wan made it all the way up to Vader, unchallenged, in a heavily militarised and guarded "fortress" is a political victory in itself. All the onlookers (had they free thought) may have wondered how Vader had not sensed or anticipated this, and how Vader may be "losing his grip" on power. This sort of thinking could lead to a mutinous uprising, or even just a challenge from one of the other senior leadership (although they're somewhat brow-beaten by the strangling incident earlier on). No matter what, he's definitely going to get a telling-off from the Emperor for letting this happen.

Thus, Vader, surrounded by his subordinates must be seen to be decisive and to act in a manner that befits his position. Thus, he simply must prevail over Obi-Wan or die trying. It doesn't matter at that what comes in the future may be worse - he'd only be hastening that problem by sparing Obi-Wan (and he will have time to prepare for a future problem). As such, Obi-Wan could have said absolutely anything - Vader would still have to kill him.

I do not think there is a definite answer, only speculation.

While other answers may be right in that perhaps Force Ghosts may not be a concern to Vader, despite that we do eventually learn they can evolve to be able to interact in the material world (Yoda: Force Lightening, The Last Jedi), that doesn't mean that there are not other kinds of "entities" or things that exist beyond "life" that could of once intimidated him.

In fact the Marvel Comic series Darth Vader: Dark Lord of the Sith (2017) takes place right after the events in Revenge of the Sith where Darth Sidious gives a broken Anakin Skywalker an ultimatum: continue his transition into Darth Vader or die!

Vader chooses life and is then set up on a journey that only painfully continues to allow him to transition into the man that we come to know at the beginning of A New Hope.

After hunting down Jedi, bleeding that Jedi's lightsaber's kyber crystal to make it his own, he then ends up on Mustafar again where he comes across a helmet.

It once belonged to a legendary Sith (or artist), Darth Momin, but somehow Momin's consciousness is attached to the helmet and Momin tells Vader his story and how & why he should build a Castle with a Force-Sensitive tuning fork here, so that he can find and enter a portal into the spirit world and find Padme` again... 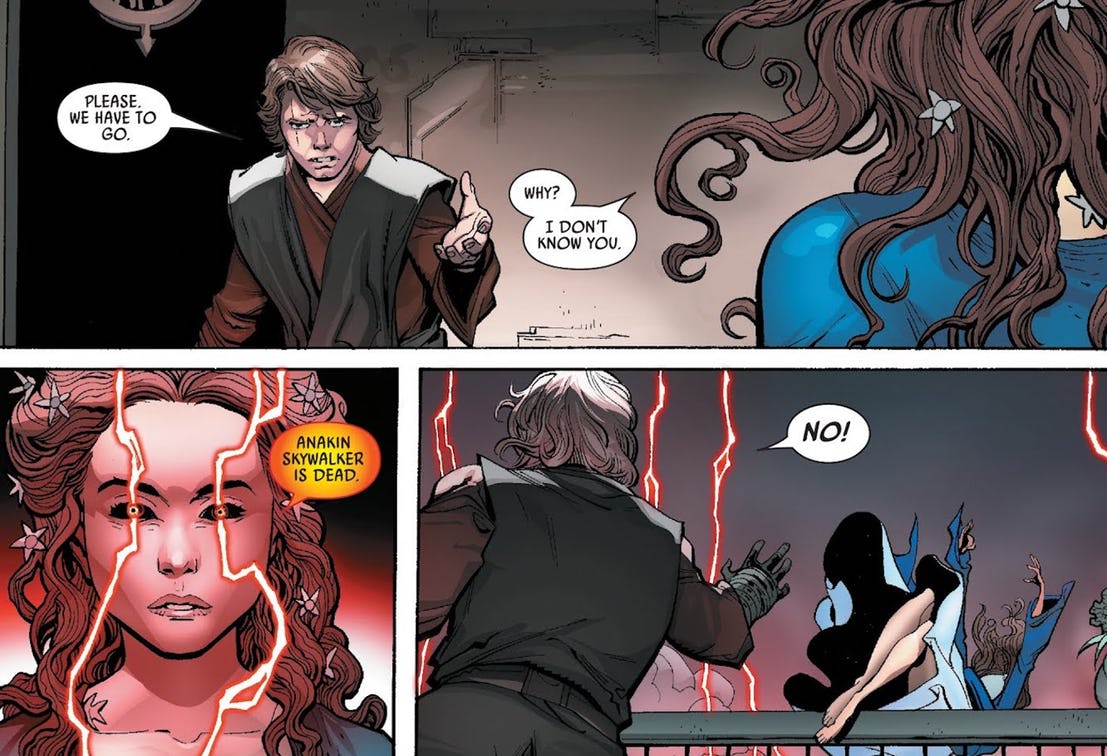 Vader does everything Momin asks and is strong enough to open the portal, but Momin comes back to life and Vader is forced to fight and kill Momin or risk loosing Padme again. Vader of course wins, but as he travels through the spirit world that also depicts echoes and fragments of memory from the past, he does finally find Padme`, but she rejects him and escapes his reach!

It appears that after this point, Anakin accepted his role as Vader, but he was also contested again and again through Sidious...

In another Marvel Darth Vader Comic (2015), which takes place in between A New Hope & The Empire Strikes Back, Darth Sidious is furious with the destruction of the first death star and so he doesn't think his apprentice is worthy.

He somehow knows or comes to meet a Dr.Cylo, who claims he has created cybernetic beings who can mimic the Force well enough, claiming that one doesn't need the force to beat it! When Vader comes to fight these cybernetic beings, he proves they are no match for the real Force, but he unsuccessfully kills Dr. Cylo, as also being cybernetic, he is able to transfer his conscious to another body! But later, Vader does find Cylo and destroy all of the clone bodies!

There are also things introduced in the Star Wars universe such as Dark Side Wraiths, which are shadowy entities of the souls or essence of dark side people/energy somehow left behind.

The Force Awakens *ALMOST did something similar with Anakin Skywalker, as this concept art depicts:

Death is a Powerful Motivator

But the reason I brought these instances up, is because Anakin's turn greatly relied on the belief in life extension, as once presented by Darth Sidious in Revenge of the Sith.

PALPATINE: Did you ever hear the tragedy of Darth Plagueis the Wise?

PALPATINE: I thought not. It's not a story the Jedi would tell you. It's a Sith legend. Darth Plagueis was a Dark Lord of the Sith, so powerful and so wise he could use the Force to influence the midi-chlorians to create life. ... He had such a knowledge of the dark side that he could even keep the ones he cared about from dying.

ANAKIN: He could actually save people from death?

PALPATINE: The dark side of the Force is a pathway to many abilities some consider to be unnatural.

Darth Sidious whole gamete has been about immortality, as he's constantly looking for relics, artifacts, or other sources of dark energy force power to immortalize himself and in which he uses to motivate Vader along, as he is also desperate to save or find the one's he lost...

And so the line might be at least curious to Vader, in that Vader himself does know the power of striking one down (Sidious pit Vader against Count Dukoo in Revenge of the Sith to continue to push Anakin towards the Dark Side, as striking someone down in anger and hate is way to do that and because Obi-Wan nearly killed Anakin in at the end of Revenge of the Sith), but also because Vader was aware and was still searching with Sidious for something "beyond" corporeal reality, as depicted in The Aftermath Trilogy.

It's just Vader's search for what he lost, was of the dark side way, and therefor it was considered by the light side as "unnatural" (Force philosophy is debatable IMO and apart of Star Wars story progression) and he realized that instead of continuing to looking elsewhere, all he had to do was save his son & daughter from the same painfully suffering fate that Sidious had done to him.

But beyond Vader contemplating his own story through the death of Obi-Wan, we really have no way of knowing what was going through his mind or how he took the line himself.

Darth Vader was likely quite dismissive of the notion that anyone could become "more powerful" after dying.

Anakin's entire character arc in the prequel trilogy was driven by loss and the measures he would take to prevent it. He took each loss personally, as a failure or reflection of weakness on his own part. He had prophetic nightmares about his mother's torture and death; after losing her, he despaired that he hadn't been strong enough to save her. Similarly, on learning of Padme's imminent passing, Anakin immediately sought a way to prevent it, declaring that he would protect her and spurning the advice of Jedi to accept loss as a natural part of life. This impulse exposed him to manipulation by Palpatine, in the latter's offer of knowledge and power over life and death. Sidious's temptations exploited and echoed Anakin's mindset - he told of a Sith Lord's strength in the Force and his power over death, and warned that only the same strength could prevent Padme from dying.

Obi-Wan's words were quite deliberate - Darth Vader sees death as something that power can overcome, and thus (inversely, and probably without realising it) something that only the weak succumb to. He is truly and literally unable to conceive of any kind of power, even metaphorical power, that accepting death might grant.

"Hokey old fashioned religion" is a phrase used at some stage.
When all else fails (or is about to) the old man is attempting to utilise FUD.

54
Why does Obi-Wan say that he'll become more powerful if Vader kills him?

54
Why does Obi-Wan say that he'll become more powerful if Vader kills him?
30
Does Princess Leia ever learn that Darth Vader is her father?
3
Why does Luke let Darth Vader kill the Emperor?
5
Contradictions in Star Wars about advocating pacifism?
2
Why didn't Obi Wan tell Luke the truth about Darth Vader?
16
What did Vader originally say when he waggled his finger?
35
What happened to Obi-Wan's lightsaber after his encounter with Darth Vader?
17
Why does Dexter allow the 'code' he follows to endanger innocent lives?
66
Why does Darth Vader not use the Force to prevent Luke from falling?
9
What is the reason that Obi-Wan lied to Luke by telling him that Darth Vader killed his father?