What does Miracle Max mumble after Inigo says “Humiliations galore”?

In The Princess Bride, in the scene where Inigo and Fezzik hire Miracle Max to restore Westley to life, the following dialogue occurs:

I make him better, Humperdinck suffers?

Ha ha ha! [Mumbles something.] That is a noble cause! Give me the sixty-five! I'm on the job!

What does Miracle Max mumble?

Some dubious transcripts online state that he says "I'm gonna lick the Dalmatian," but I doubt that is accurate.

It's unclear but it seems that this may just have been Billy Crystal ad-libbing a few words.

Certainly the original book by William Goldman has nothing and the same is true in his screenplay adaptation.

“Now that’s what I call a worth-while reason,” Miracle Max said. “Give me the sixty-five; I’m on the case.”

The Blu-Ray subtitles would also seem to indicate that this is just nonsense ad-libbing as they just read "SCATTING" which is described by Wikipedia as...

In vocal jazz, scat singing is vocal improvisation with wordless vocables, nonsense syllables or without words at all. In scat singing, the singer improvises melodies and rhythms using the voice as an instrument rather than a speaking medium. 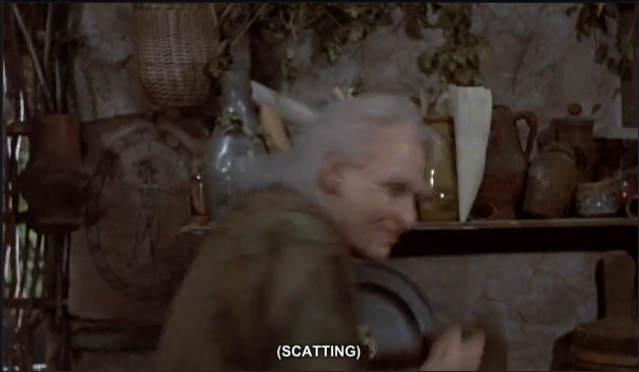 Not the answer you're looking for? Browse other questions tagged dialogue the-princess-bride .