Why was the DeLorean covered by ice?

In the first time-jump, where Einstein moves 1 minute into the future on the parking lot, the DeLorean arrives covered by ice. It never happens again for the remainder of the series, if I'm not mistaken.

Why was it covered by ice on the the first time-jump?

There are extensive answers on our sister site, Science Fiction & Fantasy, addressing this precise question.

Rather than copy the full details I will copy the relevant points here and link the full answers.

In fact it seems likely that there WAS some ice on other trips but due to the ambient temperature and humidity this may have not been apparent or melted before we see it.

The formation of ice requires at least 3 things.

The time factor is clearly seen in both Einstein's short trip and Marty's trip from 1955 back to 1985 at the end of the movie.

Here is the return of the DeLorean with Einstein just as the car is spinning to a halt. 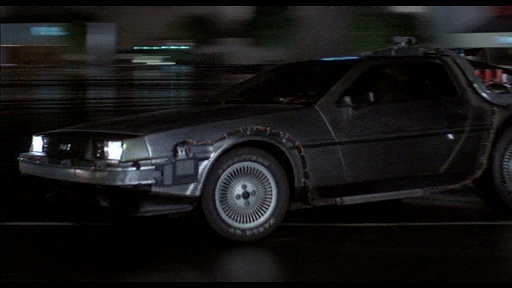 But here it is a few moments later. 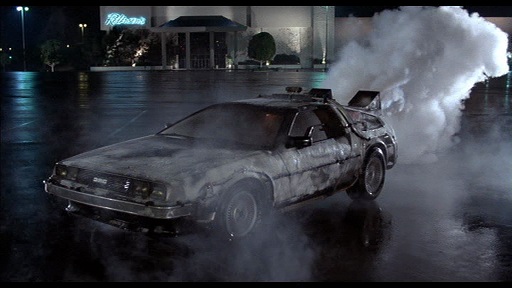 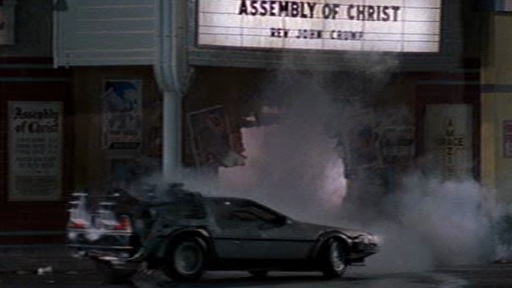 And by the time the terrorists are coming to get revenge on the Doc., ice is apparent. 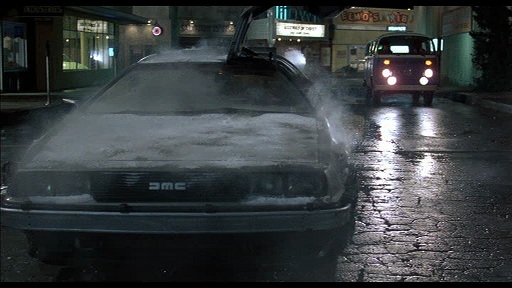 So the Doc. mentioned cold, we've seen the effects of time, the other factor is moisture, or in this case, humidity.

The scenes where Marty goes from 1985 to 1955 are slightly different, in that the car is surrounded by mist, but there is little evidence of ice on it while in the barn. By the time Marty drives it back out of the barn, the effect has vanished.

Here is the first part of the time in the barn, the mist is obvious but there is not much ice, if any. 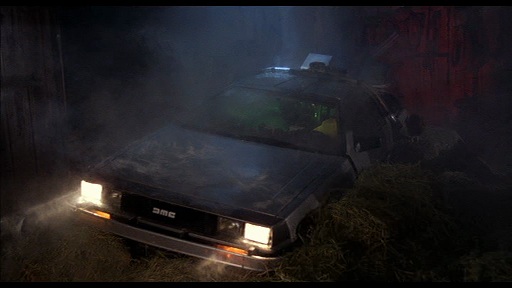 A few moments later we see that the mist has cleared, and though there is no ice on the car, there is a sheen of moisture on the bonnet and windscreen. 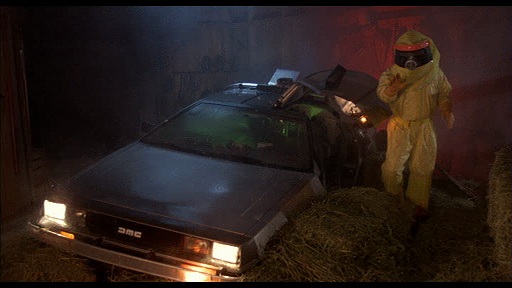 My conclusion is that in this trip, it was a lot less humid (to gain less ice), & significantly warmer, to melt it faster.

The out-of-universe reason for the disappearing ice was explained in the commentary track to the first movie (transcript here) with writer Bob Gale and producer Neil Canton, and Gale also suggested the in-universe reason could have something to do with the switch from the plutonium power generator to Mr. Fusion:

Bob Gale: I believe this was liquid nitrogen that we had sprayed all over the car to ice it up.

Neil Canton: It was also a problem keeping it on the car... it would drip off several times before we were ready to go.

Bob Gale: This is the iciest you'll ever see the DeLorean. You'll notice as the movie goes on, when the DeLorean reappears from a time trip, there's less and less ice on it, and finally by the time we're into the sequels there basically isn't any. I figured we used Mr. Fusion as an excuse why we weren't gonna have ice on the car anymore - great idea, great visual, and a pain in the ass to shoot.

71
In Back to the Future Part II, how could old Biff have made it back to 2015?
8
Crossing your own timeline, changing the future - how does that work?
6
Why does Peter Bishop still exist?
8
Did Myranda try to kill Ramsay?
7
Why were they covered in ice/snow the first time through the portal in SG1?
2
Control the past, control the future in a different time-stream?
6
Why doesn't Doc use the DeLorean in order to escape from the Libyans?
3
How will Makoto and Chiaki be together in the future?
4
In BTTF, Did Marty make his first jump in the Twin Pines car park on purpose?