Has Cobra Kai broken the canon of the Karate Kid movies/1989 series at all (or was it already broken)?

As I'm watching the Cobra Kai series, I'm in awe with how phenomenal the series is in regards to inverting the conflict of the movies, while keeping true to the canon of those movies almost precisely.

Before asking this question, are there canonical inconsistencies between the three Karate Kid movies, or between the movies and the 1989 series, since movie series (especially from the '80s) aren't known for their canonical consistency?

I just finished watching S2E7: "Lull" (watching weekly), and I noticed that in S2E6: "Take a Right", Dutch was absent. This article is right that maybe Dutch couldn't make the road trip on such short notice, so this doesn't break canon. It's an incredible feat that they were able to have the other 3 actors reprise their roles alone.

That being said, has anyone noticed canonical inconsistencies between the prior movies/series and Cobra Kai?

None to my knowledge or google-fu but showrunners constantly addressed. What is canon and what is not, From CBR

"It's our belief that anything that has happened in a movie Mr. Miyagi was in, which includes The Next Karate Kid, is part of the Miyagi-Verse and our series takes place in the Miyagi-Verse," Hurwitz explained in an upcoming interview with CBR. "Any character who has lived within this Miyagi-Verse has potential to show up at some point on Cobra Kai." He added, "I can say that the three of us, as writers, have literally discussed pretty much every person who has appeared in those films, from these large characters you're talking about, like the Terry Silvers of the world, to the most minor characters who had one or two lines."

This confirms all four initial movies with Late Pat Morita as Mr. Miyagi is canon :

Also confirming The Karate Kid (2010) is not canon.

But what about The Karate Kid (TV series) where Robert Ito voiced Mr. Miyagi?

That also was answered by Jon Hurwitz in his tweet: 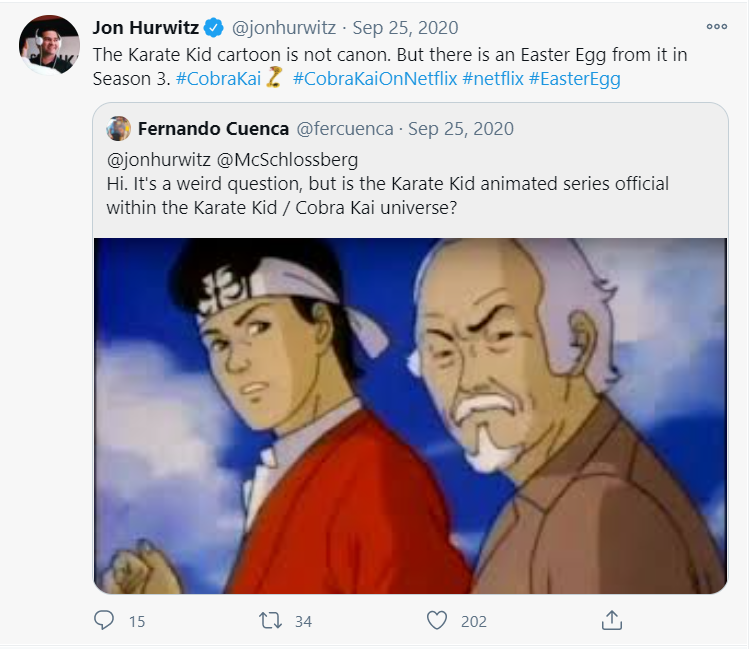 For the Dutch's absence, It's also referred to in the later seasons:

In "Take A Right," his Cobra Kai friends Johnny, Bobby, Tommy and Jimmy talk about the time Dutch smashed the dartboard which resulted in him being sent to juvenile hall, and one of the others remarked that was not his only time. Johnny remarks how Dutch's criminal career continued into adulthood, as he is currently remanded to Lompoc Federal Prison. Bobby, now a pastor, has frequently written letters to Dutch to show he is not forgotten and hopes he can minister to him inside the prison. The four men then toast to Dutch's memory in a seedy bar. - Fandom.com

1
Do I need to watch any of the previous Karate Kid films for better understanding of Cobra Kai?