Did Captain Barbossa continue his career as a privateer in the fifth film? 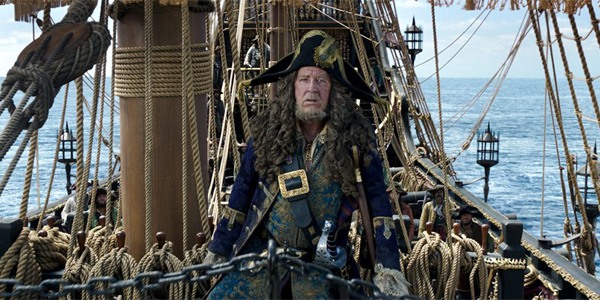 In the fourth film, Captain Barbossa became a privateer by taking the royal pardon from King George. In the fifth film, he wears a British culture wig. His hat and clothes also belong to the British. And I don't think Great Britain will allow him to freely pirate the seas after all that happened.

No, he's no longer a privateer, but a powerful and wealthy pirate controlling the seven seas.

At one point towards the end of On Stranger Tides Barbossa declares,

"I care not for King George or tavern yarns that give hope for a healed limb. But I'd give my left arm for a chance at Blackbeard."

and later after Blackbeard is defeated,

"All hands! Ply to windward! Get cracking, ye bloomin' cockroaches! [laughs] The Crown served me well. But now, by the Gods of sea and sky! Make way for Tortuga!"

Hector Barbossa returned to a life of piracy and at the beginning of Dead Men Tell No Tales, he's become 'the terror of seven sees' by use of Blackbeard's former sword and Queen Anne's Revenge...

He became the terror of the Seven Seas, pillaging the wealthy trade ships and filling the holds of the Queen Anne's Revenge with treasures beyond most men's wildest dreams. With the power of the Sword of Triton, Barbossa finally fulfilled his old desire of living the life of a rich rogue. He surrounded himself with riches, dressing himself in finest uniforms he could steal, and even replaced his wooden peg leg with one made of gold. He successfully took over the pirate world, his name being whispered in fear across the Caribbean, and when his Jolly Roger was spotted at sea, pirates and soldiers alike knew it was only a matter of time before they were conquered.

It also becomes clear that there aren't many real challenges left and that he almost seems bored with this life style and it's the challenge of Salazar and reveal of Carina that seems to give the character some real meaning to his life back.

Not the answer you're looking for? Browse other questions tagged character pirates-of-the-caribbean dead-men-tell-no-tales .

13
Did Captain Jack Sparrow eat people?
2
What is the approximate age of Captain Jack Sparrow?
6
What's the meaning of this conversation between Jack and Barbossa?
5
How did the barnacles get there in Pirates of the Carribean: Dead Men Tell No Tales?
4
Why did the Black Pearl not change?
20
How did Jack Sparrow become the captain of the ship?
3
Why did the Devil's Triangle only curse the crew of the Silent Mary?
6
How does Captain Salazar know about the compass?
5
What did Calypso say after Barbossa asked for her help?