Why does Mr Burns check his watch in the opening credits of The Simpsons?

This might seem like a somewhat obvious question but I've always been curious and never really thought enough to ask about it until now. In the opening credits of The Simpsons, at least in the early seasons when they had the original full credits, as Homer hears the quitting whistle blow we can see Mr. Burns and Smithers in a control booth of some sort behind him. When the whistle blows, Mr. Burns puts his ear to his watch and then waves his wrist as if to shake it back to working function.

My question is what is he doing? I've always assumed that he thought his watch was making the whistle sound and so he was checking it. But seems like a more obvious answer might be that he's surprised that its already time for his workers to go home but if that's the case then why does he shake his watch as if it isn't working? Any idea why he's checking his watch? 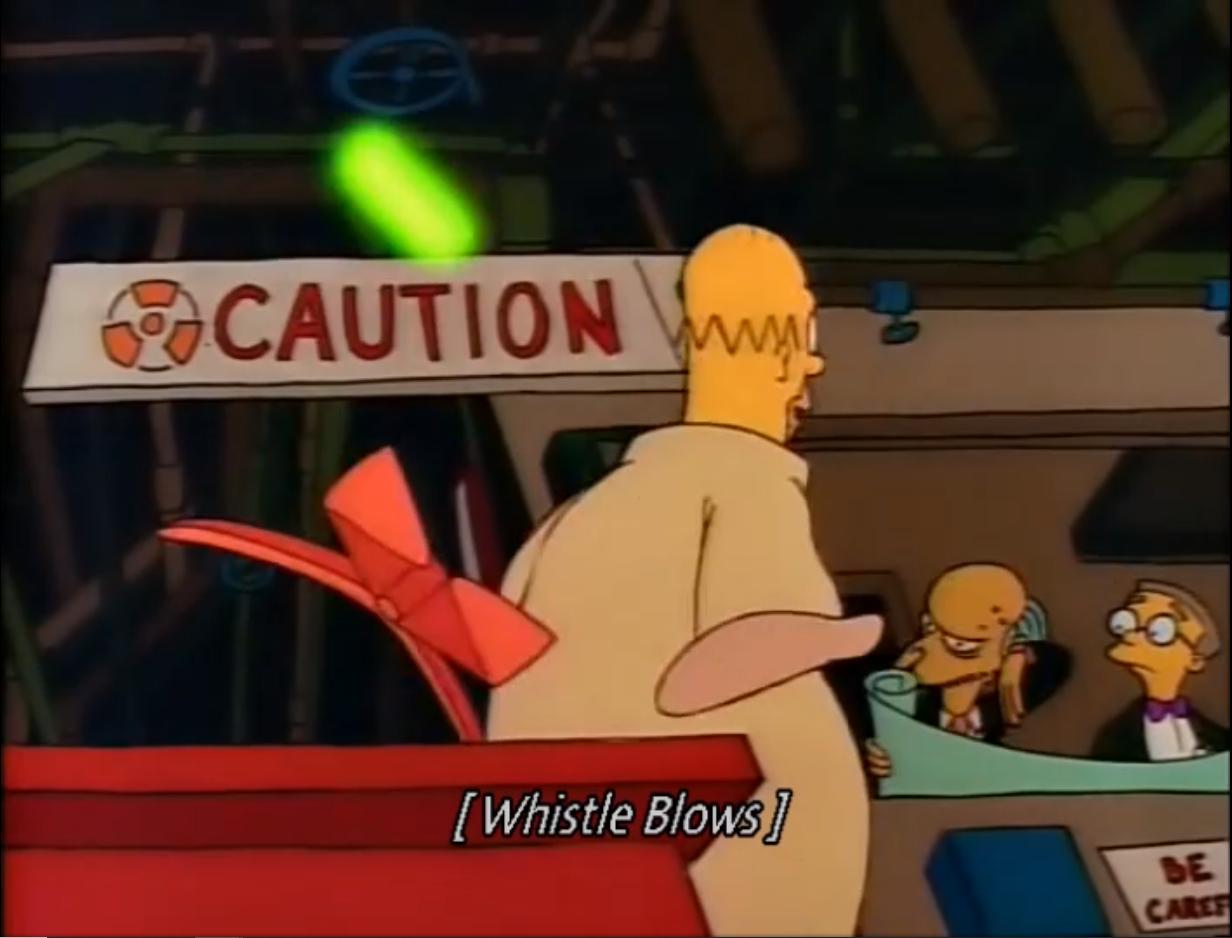 This answer is based on the events shown at ~00:00:21 in The Simpsons opening sequence for the 1990-91 season which was largely the same from 1990-2009. Other season opening sequences may vary¹. In all seasons, the opening sequence introduces the characters by showing a brief microcosm of their personality traits. e.g. Homer's aversion to work, Marge's motherly instincts, Bart's detention, Lisa's extra-curricular activities, etc.

In the early seasons¹ of The Simpsons, Montgomery Burns does a double-take on his watch when the Springfield Nuclear Plant's shift whistle blows in the opening montage.

A factory or plant 'shift whistle' is synchronized with a central time clock. These often have an integrated in/out time card punch system associated with the drudge of boring, menial work. While The Simpsons is a cartoon, it really isn't styled as SciFi or future tech so it is highly unlikely that Mr. Burns' watch controls the shift whistle.

Mr. Burns apparently doesn't think it is quite time for shift end. Worried that he is not getting a full working day from his employees, he looks at his watch. Concerned that his watch is not showing the correct time, he holds it to his ear to see if it is ticking and then shakes it as if that it somehow going to instantly correct the situation.

¹ The scene with Montgomery Burns wasn't included until the 1990-91 season. In the previous 1989-90 premiere season, there was a co-worker eating a sandwich with the help of some forge tongs. For 2010 and later, some background scenes became transient and Burns and Smithers were replaced with other scenes; one involving Lenny and Carl with the 'X Days Without Accident' sign.

103
Why are the Simpsons yellow?
20
In The Simpsons, why did they kill off Maude Flanders?
4
What does Lisa call the Tibetan Buddhist Devil's name in "The Simpsons"?
7
Why does Homer say The Who used to be named The Hillbilly Bugger Boys?
96
Does this room exist in the Simpsons' house?
5
When does The Simpsons display episode title?
42
Why does Homer handle a rod of uranium in the opening?
3
Why does Rod Flanders have black hair in the episode "Lisa's First Word" (9F08)?
8
Why does Bart Simpson frequently speak British sentences in the classic The Simpsons episodes?