Is this sequence in “Star Trek” (2009) a reference to a Hoth sequence from “The Empire Strikes Back”?

In the Kelvenverse timeline, which begins in Star Trek (2009), there is a sequence where alter-Spock attempts to rid himself and the Enterprise crew of alter-James T. Kirk, after getting off to a rocky start.

He deserts Kirk on a snowy planetoid where there is a Federation outpost called Delta-Vega outpost. But before he discovers this information from a prime Spock, he is chased by an alien baboon-like creature, in which then another comes (Hengrauggi Monster), attacks the first creature and then continues to go after Kirk until Spock Prime comes out of a cave with a torch lit.

This sequence however seems a little familiar reminding me of Luke Skywalker's sequences against a Wampa on Hoth in Star Wars: The Empire Strikes Back. There is also a similar sequence in The Phantom Menace where a fish species is after Qui-gon, Obi-wan, and Jar Jar in their underwater speeder, but another larger fish comes and eats the smaller one. Qui-gon comments, "There's always a bigger fish."

In addition Star Trek's following cave scene where Kirk gets knowledge and wisdom from the older Prime Spock is a similar concept to Luke getting knowledge from the wise and old Yoda, along with the cave on Dagobah, also featured in The Empire Strikes Back. 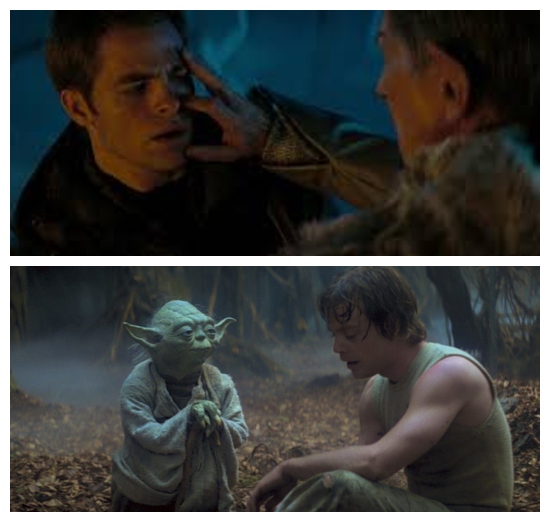 So my question is, are these sequences reference to Star Wars, mostly The Empire Strikes Back? Is there a source to back these potential allusions up?

8
Was the family connection established in The Empire Strikes Back?
6
In Star Wars, is the Wampa's dismembered arm foreshadowing?
5
Contradictions in Star Wars about advocating pacifism?
11
How can Maz have Luke's lightsaber in Star Wars VII?
8
Meaning of Mark Hamill's “I am your father” line from The Flash
50
Why does Luke leave the wampa’s cave?
65
Why does Darth Vader not use the Force to prevent Luke from falling?
28
Luke's failure at the cave