What happens when two bullets strike each other? 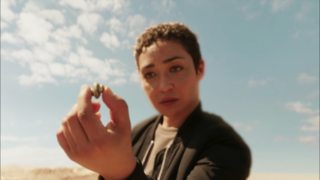 Is this depiction realistic? Can this happen in the same way in reality?

It's not really an exact scenario, but it should provide enough evidence to support the theory.

This SlowMo Guys video captures paintballs being fired at each other in slow motion, and while both the paintballs are different quality, and the collision angle isn't always perfect, the paint explosion shows a consistent opposed force.

this shows that two projectiles, when they collide with the same force, they will "stop" (i.e all exerted force from one projectile should negate the opposing projectile).

In addition to this, there is evidence of bullets "fusing" together when they collide in midair: 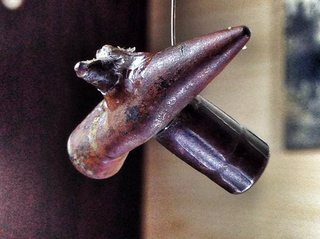 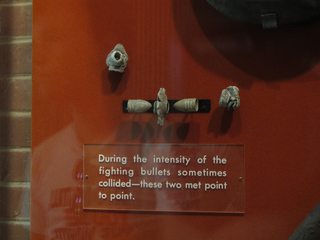 If I'm wrong, please correct me!

Since this is a movie-the bullets hitting each other and dropping is plausible. I never saw it-but if the bullets fused, that would be more plausible. If you fired 100 bullets at 100 bullets you'd get different results some percentage of the time. It's a neat effect either way. And I think the Mythbusters used a stationary bullet and a moving one because the rifles didn't fire at the same time. Never saw it either just looked it up.

Not the answer you're looking for? Browse other questions tagged realism preacher .

6
Is the brain sequence similar to reality or not?
15
How realistic is the hacking depicted in Blackhat?
7
Was the depiction of the police's reaction in the shootout accurate to how real police would behave?
9
Jumping onto a horse in movie stunts
7
How realistic was the communication between the troglodytes?
4
If you coat a lightbulb with (human) blood, will the light be tinted red?
1
What could have saved the Cali Cartel?