Why does Stan Lee play random extras in Marvel films?

While looking at the cast of The Incredible Hulk I say Stan Lee was cast as:

I've noticed he plays an extra in the Iron Man, X-Men, Spider Man films as well as other Marvel films.

Why does he cast himself as an extra in a lot of his films he's involved with producing? Is it just a bit of joke just to see do people notice him?

Stan Lee isn't casting himself in these cameos - it's a tradition which started back in 1989 with one of the original TV Hulk spin-off movies, one that has endured ever since. 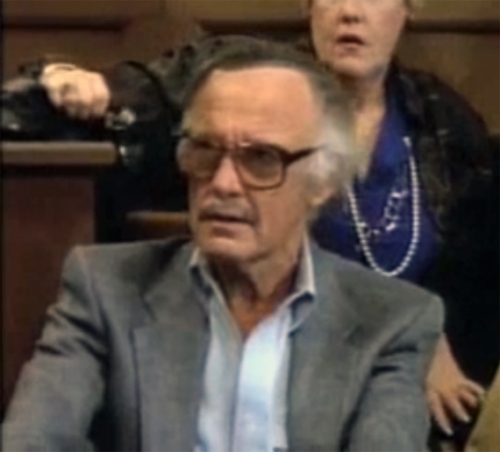 From The Trial of the Incredible Hulk - 1989

He may have a producer credit on the Marvel movies, but his involvement doesn't go any deeper than just being a beloved figurehead - these cameos are homages by the filmmakers.

A comprehensive list of his cameo appearances, plus images, can be found here.

"It’s almost scary ‘cause they just give me a date. They’ll say, "Stan, come over next Thursday for your cameo," but they don’t tell me what it is. So, I show up and they say, "Go to wardrobe." In wardrobe, they say, "We want to get you a white shirt and a green sweater and a black zippered jacket," and I’ll say, "Don’t bother, I’m wearing one." And then, they say, "But, you can’t wear yours!," and they look around and get me the exact same thing, but I’m not allowed to wear my own. And I still don’t know what my role will be. I go on the set and one minute before we’re gonna shoot, the director says, "Okay, Stan, this is what I want you to do. So, I don’t know what is expected of me, until I get there, but of course, I do it magnificently."

Unconfirmed reports suggest that he will be a beauty contest Judge in Iron Man 3 and a London bus driver in Thor: The Dark World.

Because he is a watcher or works for them. Likely Uatu, the watcher that's assigned to watch Earth. Confirmed by Marvel in the Guardians of the Galaxy Vol 2.

Not the answer you're looking for? Browse other questions tagged cameo stan-lee .

27
Why doesn't Stan Lee make a cameo appearance in X2?
4
How do Stan Lee's random appearances work in the Marvel Cinematic Universe?
10
How much is Stan Lee paid for his cameos in MCU films?
17
Where is Stan Lee in Fantastic Four?
9
Why does Stan Lee make a cameo in The Princess Diaries 2?
10
What cameos has Stan Lee had?
8
Does Stan Lee have any creative control whatsoever over how his characters get used?
9
Why was there no Stan Lee cameo in Deadpool 2?
4
Why did they put Stan Lee in Teen Titans Go! To the Movies?
32
For which future movies did Stan Lee finish his cameo?