Is Satine's Pink Diamond Dress inspired by Glinda's Dress from The Wizard of Oz?

In Baz Luhrmann's 2001 tragic romantic musical extravaganza, Moulin Rouge, there is one number in particular when Satine (Nichole Kidman) performs and she is wearing a very light pink with silver diamonds and bead-work and feathered-skirted dress, sometimes referred to as the "Pink Diamond" dress. 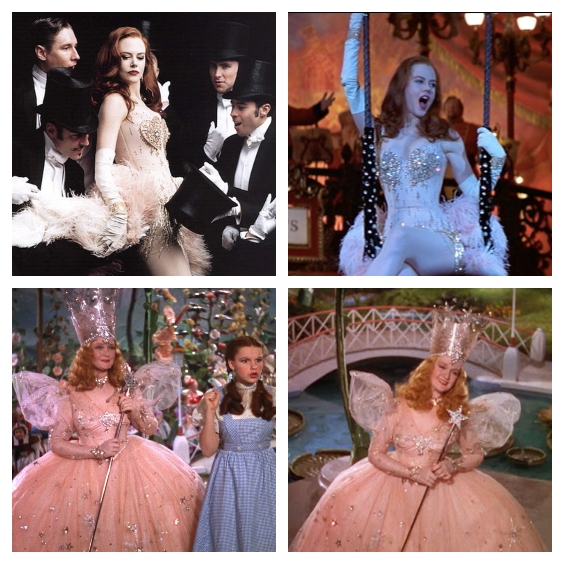 It's not that the dresses look anything alike outside of a similar color pallet, as Satine being a courtesan would be seen as an anti-thesis to a more conservative and child-friendly Glinda the Good Witch (Billie Burke) from the the 1939 film, The Wizard of Oz, but rather the color pallet of Glinda's dress is unique and surely iconic; a combination not often seen on film. Both dresses are also "grand" in their own rights. (And of course both actress are iconic redheads)

So I was wondering if Satine's dress was inspired by Glinda's and is this a reference to The Wizard of Oz?

Note: Nichole Kidman worked with Baz Luhrmann again on the following film Australia, which more blatantly referenced The Wizard of Oz, as the aborigine child Nullah watches the film, Nichole Kidman sings: Somewhere over the Rainbow, and the cinematography tries to imitate technicolor skies.