To which country did MiGs in Top Gun belong?

In Top Gun, a US warship is placed in the Indian Ocean. In the opening and climax of the movie, US fighter planes are in a dogfight with MiGs, but the country is not revealed.

Why was a US warship present in the Indian Ocean, and to which country did these MiGs belong?

The country of origin for the MiG 28s (see footnote) was left intentionally vague. It would have been easy to have the pilots converse in their native language or even adorn the aircraft with unequivocal identification schemes.

That the enemy was never officially established in Proser's early draft or Jack Epps Jr's final script. This was likely intentional: villainous governments in the movies are routinely left vague as to not piss off their real-world counterparts, with the exception of North Korea, possibly because North Korea doesn't have a strong market for movies or video games.
source: Task & Purpose - Brad Howard

Regarding their identification markings:

However, the markings on the fictional MiG-28 aren't Soviet. The MiG-28 in the film has a single red star surrounded by a yellow circle on their tail as their only marking, while Soviet aircraft traditionally had a white trim to their red star (just to cover my bases, the North Korean Air Force uses a blue trim). However, one country does, in fact, use yellow trim on their red star insignia: China.
source: Task & Purpose - Brad Howard 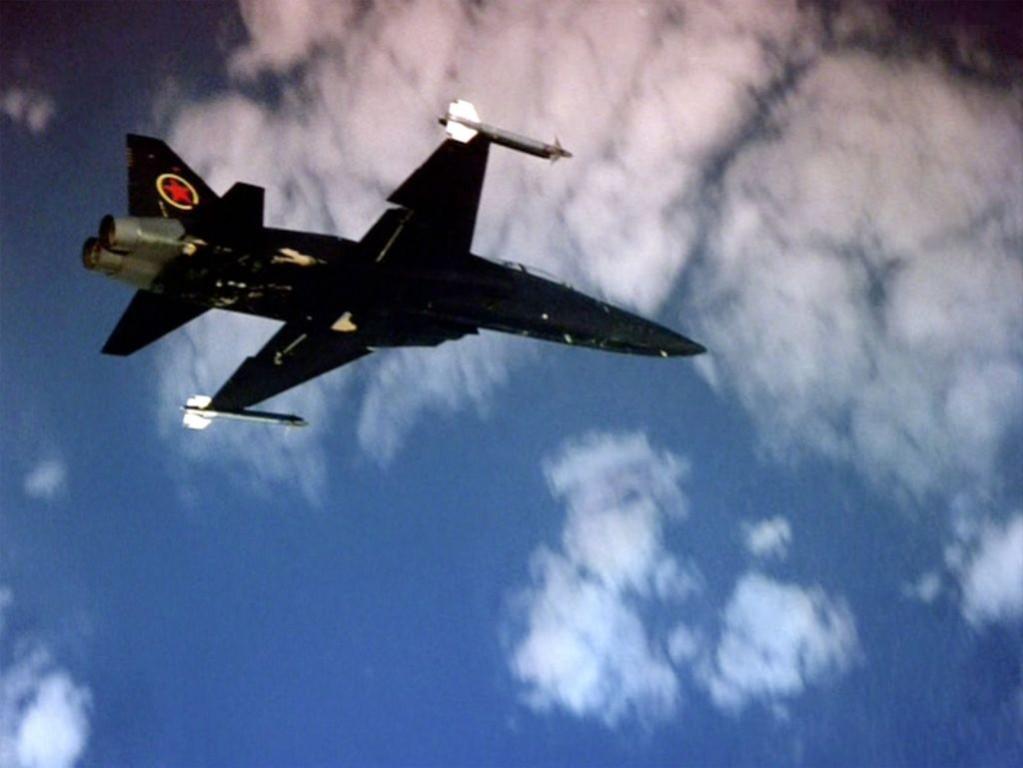 At least one of the script's draft identified the aggressors as North Korean.

Despite the markings, North Korea is still a good guess. Producers Jerry Bruckheimer and Don Simpson had more than one writer working on the Top Gun script. Along with Proser's draft, Jim Cash and Jack Epps, Jr. were hired to write another draft of the screenplay for the film that initially identified North Korea as the threat that Maverick and Co take on in the thrilling finale.
source: Task & Purpose - Brad Howard

During script rewrites, the conflict was moved to the Indian Ocean which further confuses the issue. Which nation sporting MiG28s supposedly armed with French made AM 39 Exocet anti-ship missile(s) would be so protective of that area?

So there is no definitive country of origin.

Audio commentary on the film's Special-Edition DVD release states that they were originally intended to be North Korean.

This source states that they were meant to be North Korean, but no information was actually included in the movie.

The movie takes place in 1986, while Russia was not an independent state yet, only the Soviet Union and other communistic states. Also, the MiG-28 is not a real plane, but an American Northrop F-5 painted black.

There is also no way to determine which countries used such planes in real life. However, a similar plane - MiG-29, which has been in production during 1986, was or still is, operated by about 30 countries.

Not the answer you're looking for? Browse other questions tagged plot-explanation top-gun .

16
Who stole the heroin in No Country For Old Men?
12
Why did James Bond draw his gun?
3
Whose hands are in the box?
6
Why did the Three Blind Mice get 'into character' so early?
2
Why did the cops shoot Danny even though he stopped pointing the gun at them?
1
Why did Dusty not use the internet?
3
Why was the number of MiG fighters not obvious earlier on?
7
Why didn't Al Powell investigate the lights at the top of the building?
1
Why did Randall say that Arthur/Joker tried to buy a gun from him?
9
Why did Blake fire his flare gun?