Why the triples in Stay?

There is a scene in the movie Stay (2005), when Sam and Henry are walking and there are a bunch of folks who are walking by in groups of three dressed alike. This is about 25 min into the movie.

What is the relevance of this? 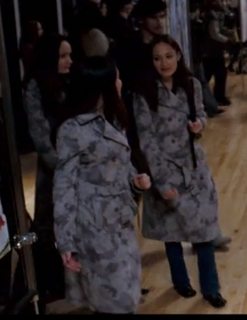 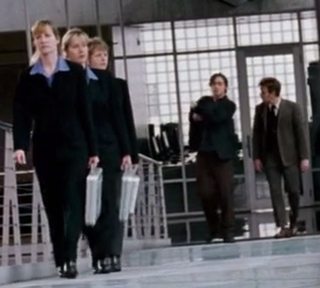 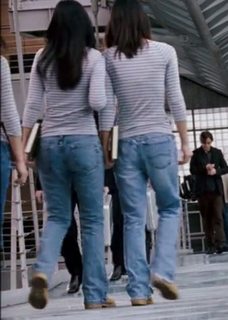 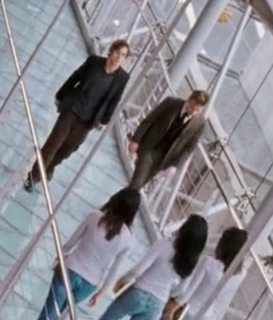 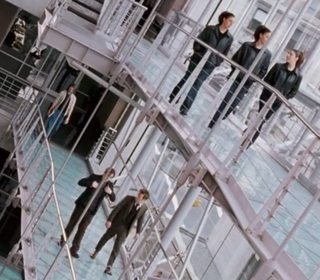 This is only my interpretation of what this scene means, as I cannot find a 'Word of God' source, and the original script makes no mention of these 'triplets' (so I guess it was probably a directorial decision). It's worth noting that this movie is deliberately left open to individual interpretation, so there may not even be a correct answer to the question:

I haven't seen this movie for probably ten years, so for quotation purposes I'll reference back to the original screenplay.

If you've seen the movie, I'll presume you know the 'punchline' that most of what we see are actually just the final scrambled thoughts in the dying Henry's head. 'Sam' and 'Henry' are both just different aspects of the real Henry as he tries to make sense of what is happening to him in his final moments. I won't go into too much detail here on this part of the explanation, as I believe the movie makes this pretty clear by the end, but it boils down to Sigmund Freud's theories about dreams.

Firstly, the movie makes a number of references to Freud, both directly and indirectly. I've certainly missed some of them, but here are a couple:

In the scene where 'Sam' first bumps into 'Lila', she is carrying a pile of psychology textbooks, and tells 'Sam' that she is on her way to meet some undergraduate students.

LILA: I don't have time to stand here flirting with you. I've got to give a test to Grünbaum's undergrads.

Adolf Grünbaum was the author of a number of works critical of psychoanalysis, and Freud in particular, especially his theories on dreams. (Read The Foundations of Psychoanalysis: A Philosophical Critique for an example of his views). I believe this scene is the first hint to the true nature of the movie - Henry's dreamstate- and also alludes to Henry's lack of understanding of his own predicament at this stage.

Freud (and his theories on dreamstates) is also directly referenced later in conversation between 'Sam' and 'Leon' (Henry's dad/Sam's mentor).

LEON: Do you remember the dream of the burning boy that Freud refers to?

LEON: He describes a man whose child is dying. The father sits by the boy's bed, night after night, mopping the sweat from the boy's forehead, bringing him water to drink. All for nothing. After the child dies, they give him a wake, set up a circle of candles around his body. The father is exhausted, of course. He goes to sleep in the next room. And he dreams that his boy stands beside him, holding his arm and whispering, "Father, can't you see that I'm burning?" When the man wakes up he runs into the next room and sees that one of the candles has fallen onto the shroud and set the dead boy on fire.

This is the first direct reference to Freud's dreamstate theories, that talk about the subconscious mind processing real information through dreams by way of conversations with other parts of the psyche in the guise of 'real' people.

'Sam' and 'Henry' represent, I believe, the two parts of Henry's conciousness, the ego and superego.

So, we have Henry, represented by 'Sam' and 'Henry', working together to try to make sense of reality, but why only two parts to Henry and three parts to the other people we see here? Freud splits the human psyche into three parts, the third being the id. The id is the basic, instinctual part of the psyche, possessing no rational qualities.

I see this scene as the director hinting to us that:

I think this scene is just the director hinting towards the true nature of Henry's predicament.

Not the answer you're looking for? Browse other questions tagged plot-explanation stay .

8
Why is the father blind in the dream world?
7
Post office reference in movie Ronin
13
Why is the “STAY” message sent in Interstellar?
15
What's the relation between the different clans?
6
What were the last set of flashes of memory about?
6
How did “Ten Second Tom” know where he was going?
37
Why would Vivian think that Edward couldn't afford $300 for her to stay the night?
0
Who attacked General Mapache's men even before Pancho Villa's men received weapons from the Wild Bunch?
3
Does Detective Somerset stay as a detective?