What is being said in the purely Native American language scenes in Jim Jarmusch’s “Dead Man?”

While Jim Jarmusch’s film Dead Man (1995) is a 19th century American period piece that contains mostly American English dialogue, there are a few scenes in the film that are spoken purely in Native American languages without translation or subtitles. As explained on Wikipedia; bold emphasis is mine:

The film is also notable as one of the rather few films about Native Americans to be directed by a non-native and offer nuanced and considerate details of the individual differences between Native American tribes free of common stereotypes. The film contains conversations in the Cree and Blackfoot languages, which were intentionally not translated or subtitled, for the exclusive understanding of members of those nations, including several in-jokes aimed at Native American viewers. The Native character was also played by an Indigenous American actor, Gary Farmer, who is a Cayuga.

That all sounds fine. But does any translation of the dialogue exist anywhere? 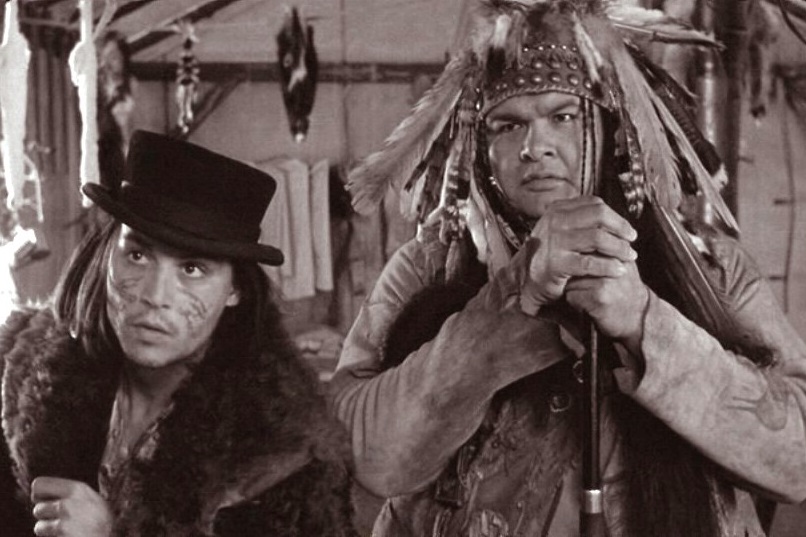 Okay, I found a post on Reddit from 2015 that essentially asks the same question as this question. And there is an answer there that provides translation of some of the dialogue, but it is in a PDF format.

So I am posting that translation here as plain text—with some copy edits and formatting tweaks—so it’s easier to read. Here is the scene with “Nobody” and his girlfriend translated by Dorothy Thunder from the University of Alberta from Cree to English:

Girlfriend: Tâp’we cî ôma ewînakasiyan? (Is it true that you are going to leave me?)

Girlfriend: Ketweyan kîya esaweyimikâsot maskwa mâka ki-tâpwem kîminîcâkanis! (You say you are a gifted/blessed bear but a true/real bastard. I pray here to night moon every night you to have a child but you don’t agree to it. This is not me — I am still young and kind — you dick/penis!)

And here is info on the scenes in the Makah Village near the end of the film translated by Maria Parker Pascua and according to her those scenes are in the Makah language and the tribes mentioned were Cree and Blackfoot. Leaving in some descriptions for context from the translator:

The 6th scene has Makah words when they arrive by canoe on the Columbia River to a Native Village.

Nobody: Hello! Is that you folks, my Makah people (A form of greeting in Makah). I am Nobody.

The next part is not as clear, but it sounds like he is continues on to say something like:

Nobody: Needing an Indian Doctor (Shaman/Healer).

Nobody: Give. (Like give help or maybe give them the sick man?)

The last scene with Native language is also Makah, but the first part sounds a little clipped.

Nobody: Hello! Is that you folks? (A form of greeting in Makah). It’s a nice day!

And a village man answers him with:

Village Man: Yes. It is a nice day.

Not the answer you're looking for? Browse other questions tagged plot-explanation translation dead-man .

11
How did the prosecution know what Bates said?
10
What is the point of making some dialogues inaudible and not showing some language translations?
51
What happened to the bodies in American Psycho?
10
What is the "prayer" being said when Elsa was being crowned?
3
Do Aliens intend to teach every human being the Universal language?
1
Why does Ivar say "who cares?" when Sigurd Snake-in-the-eye said "Siggy is dead."?
10
What is Geun-se (the man in the cellar) messaging to Da-song, the Park family's son?
3
Is the Invisible Man present in these scenes?