Is the female “Ralph” character playing along?

In "So I Married an Axe Murderer", Harriet (Nancy Travis) cries out for "Ralph!" in her sleep, which Charlie (Mike Myers) correctly attributes to one of her "missing" fiancés.

In trying to cover for herself, Harriet later introduces Charlie to a female friend named Ralph (Jessie Nelson) to ease his mind and convince him that this woman was the subject of her dream.

I'm never sure whether:

Can we infer anything about this character's role based on her motivation or intentions?

It's important to bear in mind that although Mike Myers' character is under the mistaken belief that his fiancee/wife, Harriet, is hiding the fact that she is an axe-murderer, what Harriet is really trying to hide is her shame that, as she believes, she has been dumped by all of her many previous fiancees (who, in fact, have actually been murdered - they didn't dump her at all).

She has come to believe she is so unattractive that any man who gets to know her intimately will dump her. She becomes pathologically terrified of Myers finding out she's had so many previous engagements.

She therefore persuades her girl friends to conspire with her to hide that from Myers. This is a comedy, and the joke is that Ralph is an unlikely name for a girl; but, nonetheless, at one point Harriet does try to pass off her unintentional mention of 'Ralph' as a reference to a girl she knows. To convince Myers, she then has to get one of her female friends to pretend to be Ralph.

Based on the fact that she's named thusly in the credits, I'm inclined to believe that Jessie Nelson's character is indeed called Ralph. It seemed more likely to me that Harriet knows two Ralphs, one her former fiancé and one an old friend whom she sees infrequently.

When she's quizzed by Charlie, she pretends that she was dreaming about her friend when she was in fact dreaming about the fiancé. Some considerable time later, the female Ralph turns up for a short visit. 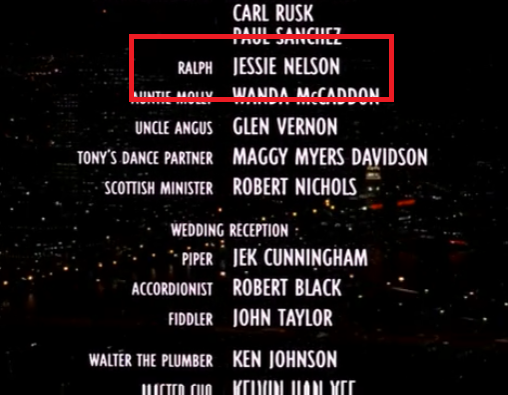 Not the answer you're looking for? Browse other questions tagged character so-i-married-an-axe-murderer .

8
Why was a female selected for M's character in James Bond?
5
Is this the same character?
4
Is there a name for a dead character (both male and female) that appears more frequently than others in TV / movie scripts?
5
What is the story behind the Asian female assassin?
9
Why did she blow herself up along with the bridge?
4
Was Fritz a Nazi all along?