Was the 2019 Lion King film made through motion capture?

In the movie The Jungle Book, Favreau utilized motion capture with certain actors, expressing a desire to avoid overusing the technology in order to prevent evoking an uncanny valley effect. This is a reference from Wikipedia.

I couldn't find any authentic source confirming that Lion King was made with performance capture.

The simple answer is no, it's not motion captured. But there is even confusion about it being considered live-action or animated for award nominations.

Disney’s upcoming Lion King adaptation has reached a slight hurdle. The film, a remake of the 1994 animated classic, is not exactly a “live-action” movie because all of its animals are computer-generated, though plenty of people and media outlets have called it that. But director Jon Favreau also argues that it isn’t technically right to label the film “animated“ either

“Well, it’s difficult because it’s neither, really,” he told SlashFilm. “It depends what standard you’re using. Because there’s no real animals and there’s no real cameras and there’s not even any performance that’s being captured that’s underlying data that’s real. Everything is coming through the hands of artists.”

For additional trivial information, there was one scene in the film which was not made on computers as per Favreau's tweet: 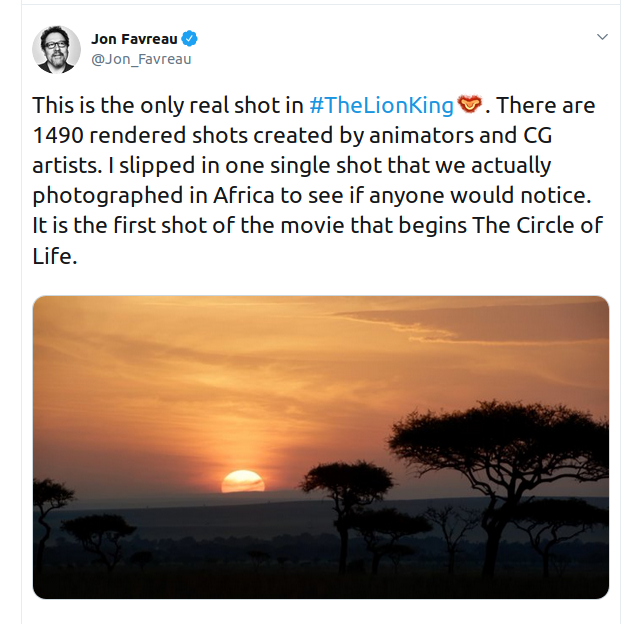 In an interview with Collider, Jon Favreau said:

...we don’t do motion capture for performance, because we don’t want to do it. We don’t want to put markers on animals, we don’t want to involve live action, live animals in this. In Jungle Book, we didn’t have to. I think that’s a nice next step for movies, is to leave the animals alone.

What we’ll do for performance is I’ll have the actors in this room, we clear it out, it’s a soundproof room. We have microphones, and instead of recording with music stands and a sound booth like we do in animated movies, I’ll instead have them performing standing up, almost like you would in a motion capture stage, except no tracking markers, no data, no metadata’s being recorded. It’s only long-lens video cameras to get their faces and performances, and that allows the mall [sic] to overlap and perform together and improvise and do whatever we want.

Not the answer you're looking for? Browse other questions tagged film-techniques the-lion-king-2019 .

15
How was the opening scene with the fly made?
4
How was the “pen through the lip” scene shot?
31
How did they film Danny tricycle riding through the hotel?
6
What was the filming technique used to film “Jim's Ride”?
35
How do they film someone being stabbed with a weapon that goes all the way through?
36
How was the motorcycle scene in The Matrix Reloaded made?
3
How/why was the slow motion coin shot achieved in Scrooged?
29
Do they still use tiger roars in the 2019 “Lion King” movie?