Was the Psych theme song written for the show?

The Friendly Indians sing the theme song for USA's show Psych. Was that song written for the show or was it previously an existing song which was used in the Psych opening credits?

The song "The Best Man Lies" was included on The Friendly Indians' EP Tiny Badness, released in 2004. 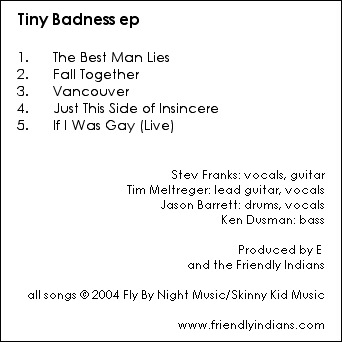 A version song was re-released as "I know, You know" in 2006 after it became popular as the show's theme song. Additional versions of the song were recorded for specific episodes of the show, sometimes using different performers.

Not the answer you're looking for? Browse other questions tagged soundtrack psych .

7
Unrelated Cast Songs for the Credits
9
What is the theme music of Breaking Bad?
7
Why didn't The Wellingtons record the revised Gilligan's Island theme song?
13
What are the lyrics to the Game of Thrones theme?
3
Is the "Oh oh oh ah oh" chanting before a Lost episode the Lost theme song, or an ABC song?
13
What is the process for a movie getting a song written by a popular artist?