What is the purpose of this "red room" in Stranger Things?

In Stranger Things, we frequently see Jonathan go inside this to "refine" his photos or something. I don't quite understand what happens here.

He puts the photo in water, and somehow this makes it more clear? An example is in the first season when he refines Barbara's photo and sees a little bit of the Demogorgon. 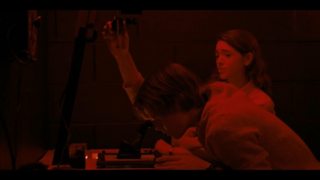 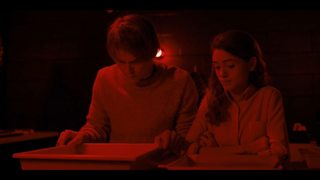 That room is called a darkroom, and it's part of the photographic printing process.

A darkroom is a workshop used by photographers working with photographic film to make prints and carry out other associated tasks. It is a room that can be made completely dark to allow the processing of the light-sensitive photographic materials, including film and photographic paper.

And for why it's red:

When making black-and-white prints, a safelight is commonly used to illuminate the work area. Since the majority of black-and-white papers are sensitive to only blue, or to blue and green light, a red- or amber-colored light can be safely used without exposing the paper.

But in the digital photographic age, darkrooms are getting outdated, as digital printing is safer than chemicals used in the previous process. It's still not an extinct process and still used by some professional photographers.

It’s Time to Accept That Your Darkroom is Dead

Do Photographers Still Use Darkrooms?

This is called a darkroom.

A darkroom is a workshop used by photographers working with photographic film to make prints and carry out other associated tasks. It is a room that can be made completely dark to allow the processing of the light-sensitive photographic materials, including film and photographic paper. Various equipment is used in the darkroom, including an enlarger, baths containing chemicals, and running water.

And it is used for processing the photographs. Jonathan is a photographer in that newspaper company, and he uses this room to process the photographs he captured. This show is set in 1983 when digital cameras were not available.

With digital photography being used these days, the popularity of such rooms is decreasing.

From the above link,

Due to the popularity of color photography and complexity of processing color film (see C-41 process) and printing color photographs and also to the rise, first of Polaroid technology and later digital photography, darkrooms are decreasing in popularity, though are still commonplace on college campuses, schools and in the studios of many professional photographers.

Yes, this is an old film technique which is used for processing photographic materials.

Interestingly enough both answers given while correct give no explanation why Jonathan sees slowly the photos he took earlier.

In the age before digital photography, the photo was made, by putting light-sensitive chemicals on a thin stable substrate (called film). Exposed to light these chemicals would go through a reaction that makes them darker. So in the camera, a part of the film is behind the lens, if you click on the button for split-seconds light is allowed to flow in the camera and expose the film. After that, the mechanic moves the film that a new part is behind the lens so that you can take another photo (in even older cameras you had to replace the sensitive material after each photo was taken).

Now, this material would darken most in the places that are the brightest in what you photograph, so the colors are inverted. This film is therefore called a negative. Also, the chemicals are still light sensitive. So in the darkroom, you remove the light-sensitive chemicals with other chemicals (therefore make the negative stable to light) and you basically take another photo of the negative, this time bigger and with the chemicals on paper, so that you can comfortably look at them. Again light-sensitive chemicals have to be removed before it is safe to look at it under normal light conditions (or everything gets black). And chemicals are used for this process (so this is not water he puts the stuff in, but a chemical solution).

Most of the light-sensitive chemicals don't react under red light, therefore the darkroom is dimly red illuminated.

As this process is time-consuming, uses a lot of chemicals and needs this special room, pretty much everyone changed to digital photography the moment resolutions there at least somewhat acceptable. The good analog film has still resolution hard to match by digital photography, but the upsides of digital are outweighing that.