Why did Spider-Man take a detour to Dorset?

In Spider-Man: Far From Home, Spider-Man ends up in the Netherlands. He then calls his friend Happy who picks him up in a private jet and they fly to London to fight the bad guy.

However before they reach London there is a scene where the jet flies over the Dorset coast (there is even a caption saying Dorset so there is no dispute there). What were they doing in Dorset? The movie gives no explanation as to why they needed to go there, and Dorset is not on the way to London from the Netherlands (in fact the quickest route to Dorset would involve pretty much flying over London).

The scene depicts the plane flying over the Old Harry Rocks in a south west direction (old harry points North East). Therefore I think the flight path would have looked something similar to this: 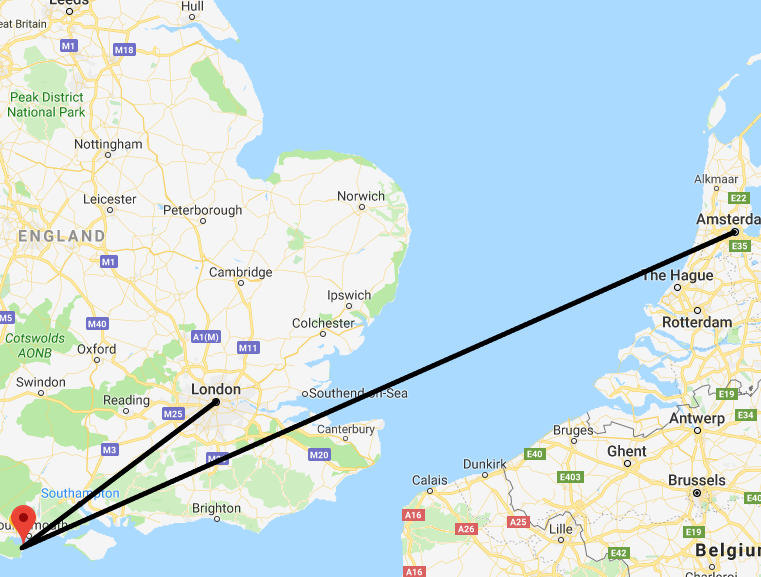 I can't remember the name of the dutch town so I have assumed Amsterdam.

This is most likely a goof or an overlooked detail. The only source on Google that mentions "spiderman far from home dorset" is IMDB, and here's what they have to say,

When the Stark Jet enters the UK, the caption states the Dorset coastline. Flying from Amsterdam to London you would cross the eastern coast of England, entering over the coast of Essex but the Dorset Chalk Cliffs are on the South West coastline which is 160 miles away.

I strongly doubt there's anything more to it because of how tiny a detail it is.

Airspace is not a free-for-all. Being a responsible pilot, Happy (or, more likely, the AI that's actually flying the plane) would have made sure to avoid restricted airspace, which could be much more expansive in 2023/4 given the damage caused by multiple alien invasions, and Britain's presumably-implemented-by-then exit from the European Union.

Out-of-universe, it might have been be an intentional joke about tourists mis-identifying landmarks (like when Flash temporarily confuses Happy by referring to Tower Bridge as London Bridge in a livestream). The location captions are used for comic effect previously, when they appear as a subtitle to the Dutch gentleman telling Happy which town Peter is in.

However, I think the coastline shown is indeed Dorset, rather than Dover, so it's probably not a joke.

They took a D-Tour (or Happy did in his plane) to go and have a look, I mean the camera did fly over the top, so that wouldn’t be too much of a crazy explication! Also, the Tower of London is made out of Portland Stone (which is from an island just a little further along the Dorset Coast), so if they truly wanted to visit the place properly a trip down there wouldn’t be a bad idea...not to mention you could easily do a D-Tour to Stone Henge and Bath that way too...but that would probably make the film too long for the producers liking to show!