Ask Question
Asked 8 years ago
Active 8 years ago
Viewed 1k times
5
votes
Closed. This question is off-topic. It is not currently accepting answers.

I'm looking for a movie. It is a western, the main character is blind and it's a really good shooter. The man is in his 50s and is dressed in black. His finally battle is in a church with the noise of the bells and dynamite.

(It is not the "Blindman" with Ringo Star.) 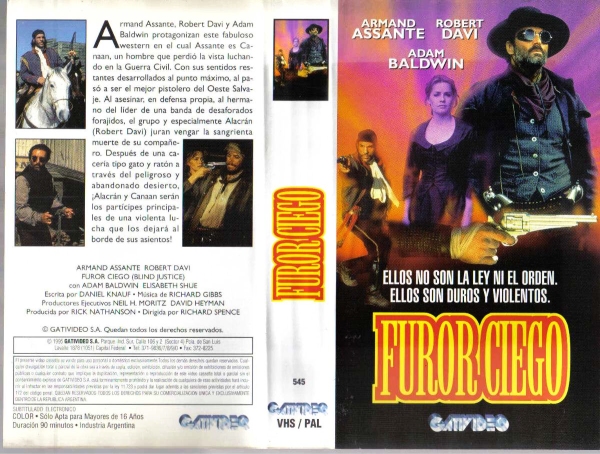 ... a western about a blind gunfighter roaming the range with a baby in tow.

The enigmatic Canaan (Armand Assante) is a serape-clad vision in black, first glimpsed carrying a swaddled infant through Monument Valley

He gets sidetracked in a one-horse town, where a small band of federal cavalry is holed up guarding a ton of silver bullion. Meanwhile, evil bandit leader Alacran (Robert Davi) controls the only road out of town, , and has so far foiled all their attempts to send for help.

But Canaan surreptitiously outfits the casket with explosives, and manages to blow casket, church, and outlaw crew sky-high. Canaan loses his hearing in the blast, but he's able to identify Alacran by smell, and dispatches him in a final showdown.

Not the answer you're looking for? Browse other questions tagged identify-this-movie western .

34
What is a “Spaghetti Western”?
4
Were there spaghetti westerns with a 'Man with no Name' before the Leone (non)-trilogy?