Where does No. 6 go with his car in the title sequence?

The title/opening sequence of The Prisoner has McGoohan's character - No. 6 - drive his car into some parking garage near the British Parliament building (IIANM). Was that garage really located there in the late 1960s? If so, what occupied the surrounding buildings? 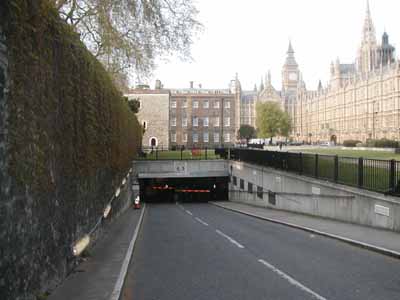 This location represents the vehicle entrance to the offices of Number Six's bosses. It appears before and after the resignation scene in the opening sequence where Number Six's Lotus is seen driving down (and later back up) the entrance ramp. The car park ramp features again in "Many Happy Returns" and "Do Not Forsake Me Oh My Darling" when Number Six returns to London and visits his former colleagues.

IN REALITY: Abingdon Street Car Park is located a stone's throw from the Houses of Parliament in Westminster, London SW1. Only the exterior of the car-park was shown in the series, as the interior car park sequences were filmed at another location, under Park Lane.

Only four houses survived the bombing of the 2nd World War which exposed the Jewel Tower behind. The remains of a medieval quay were discovered during demolition of the remaining houses. In 1963–6 Abingdon Street Garden was created. Beneath is an underground car park.

Not the answer you're looking for? Browse other questions tagged film-location the-prisoner .

7
Does The Prisoner have a 'canonical' running order?
1
Where was the 1952 movie "Hong Kong" filmed?
6
Where was this scene from The Revenant filmed?
2
What's the name of the City where "Garfield" takes place?
2
Where was The West Wing shot?
4
Are 'the prisoner's card numbers '666' a reference to a certain aspect of the plot? Does it repeat along the series?
9
Is there a canon explanation of the function/purpose of the rotating teeter-totter device in The Prisoner?
27
Where was this scene of 'Highlander: The series' with standing columns shot?
8
Did Patrick McGoohan personally own the Lotus Seven seen in The Prisoner?