In the Seventh Seal why does Death let the chess game happen?

The chess scene in The Seventh Seal is arguably the most classic scene in all of cinema: 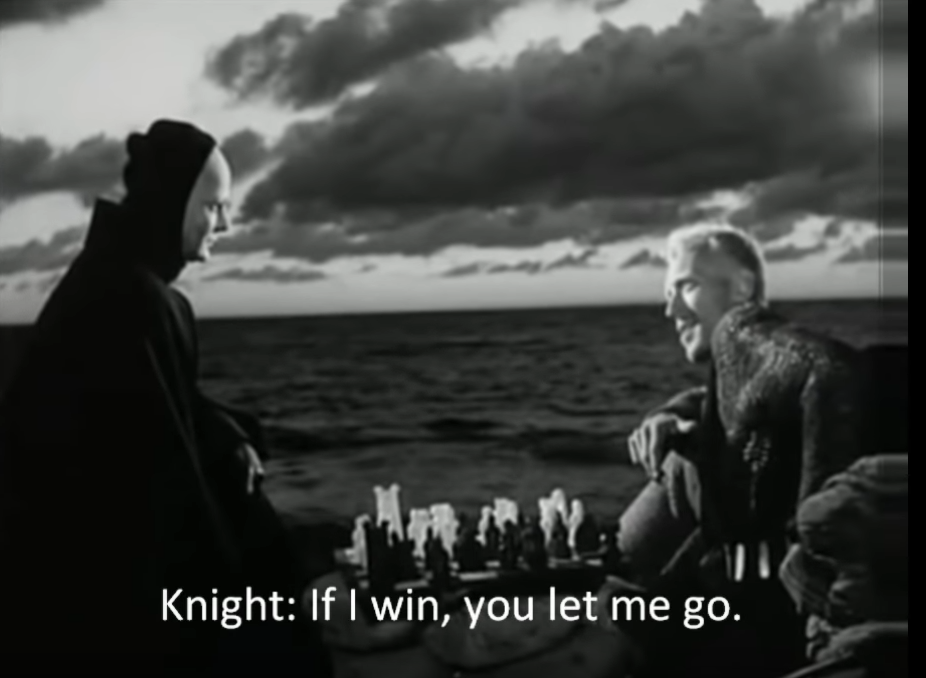 About a minute earlier the Knight has said that he is not ready and Death told him basically that it doesn't matter and there's no delaying this!.

So why does Death let the game happen?

I assume you ask "why Death allowed Knight to delay his death if he'd told him:

there's no delaying this"

To which my answer is: That's not what Death said.
First, Knight knew that Death had been following him.

Death: I have been for a long time at your side.
Block: This I know.

Block: Wait a moment.
Death: You all say that. But I give no respite.

Death doesn't give respite. Now for the magic of the movie: Time is non-existent in the movie. Look at how it begins:

And just before Death appears, there is silence. Pay attention to how long it lasted (hint: it's about background sounds). Was it for 30 minutes?

Third, Death is seen "personally" being responsible for the death of a person, so we know it didn't have to wait for a person to "die of something".

And fourth: Knight was dead from the beginning. The whole movie is a Dance Macabre, which we are only able to see through the eyes of Jof at the end.

Ingmar Bergman was partially inspired to make The Seventh Seal by a painting by medieval Swedish artist Albertus Pictor which depicts the personification of death playing chess with a knight. As a result Bergman chooses to portray Death as being an enthusiastic player of chess, willing to extend Antonius Block's life seemingly for no other reason than because he enjoys the challenge.

Playing games with Death has a long history; chess is common, but many other games show up as well. So we would have to look much further back to determine why....

Seventh Seal may be the most famous film use, but such gaming also appears in Bill and Ted's Bogus Journey:

(where Death loses, then demands best of 3, best of 5,...); in The Dove (also Bergman, with the heroine playing badminton); and in the comic xkcd with Dungeons and Dragons.

A large list of other instances in film, literature, etc., is available at [https://tvtropes.org/pmwiki/pmwiki.php/Main/ChessWithDeath]

Death seems to have this grim sense of humour throughout the movie, and isn't he kind of known to be willing to prove this point - that you can't escape him by chess or otherwise, you'll always lose.

Not the answer you're looking for? Browse other questions tagged plot-explanation the-seventh-seal .

14
Why does the dinosaur let the wounded dinosaur live?
1
Why does Ivan tell his daughter to "act her age"?
30
Why did Syrio Forel choose his wooden sword over a metal one?
1
What did Ripley tell Schenk in S01E06?
9
What is the significance of the mute girl in The Seventh Seal?
5
Why does the audience let Patty fall?
13
Is this montage in Game of Thrones (S07E03) imaginary?
16
Why does this happen with Longclaw?
1
Could the electric company employee have wrecked Hans Gruber's plan?
0
What's the meaning behind Khan's firing on the Enterprise as it approaches the Mutara Nebula?