Why did they not dig under the dome in the movie?

In The Simpsons Movie, the town of Springfield is covered in a giant impenetrable dome, leaving the people trapped inside.

There is a scene showing various characters trying to break through (including Drederick Tatum trying to punch through it!) But no one ever suggests simply digging under, even after OFF escape through a strange type of sink-hole in full view of the public!

I like to think that this is a deliberate joke by the writers - i.e. the Springfieldianites are simply not smart enough to come up with that idea, but was there a reason ever given?

From the Simpsons Wiki:

It is unknown why the residents of Springfield didn't dig a hole under the dome. A possibility is that the Springfield residents weren't thinking clearly, and just tried to break out of it, rather than digging a hole, or there was a lack of shovels. However, Russ Cargill of the EPA ordered death squads to watch the dome's perimeter, so perhaps anyone who did think to escape would have been deterred.

A long time after the dome was destroyed, Mr. Burns made another one. He was going to lower it onto Springfield, but everyone reminded him it had already been done and they could just dig themselves out of the dome. Mr Burns then left.

And here we can see, that the dome didn't end on the ground level, it went a bit underground. So we don't know how deep it goes, so that could be an explanation why they didn't try to dig under it. 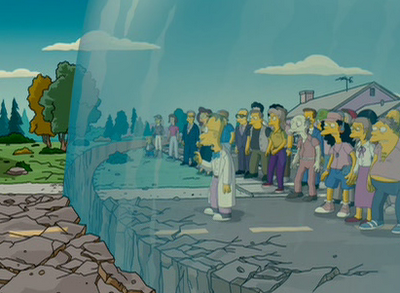 My personal opinion is that they loved their hometown and didn't want to escape for that reason, as well as they probably didn't have any place to go to. They wanted their hometown to be free and to do that, the dome had to be destroyed.

There is a scene showing various characters trying to break through (including Drederick Tatum trying to punch through it!)

At this point, it's no longer just about trying to get free. They've been trapped within the dome for 93 days, their supplies are running dangerously low, and they are all extremely stressed and cranky - as demonstrated by the inciting incident:

Helen Lovejoy: Let's discuss Tuesdays with Morrie.
Cookie Kwan: Again?! lf we don't get a new book soon, I'm going to puke!
Lindsay Naegle: You're the five people I’m going to meet in hell!
[Lindsay hurls her book out of the window; it crashes through the window of the adjacent AA building and smashes their coffee machine]

It's no longer just about getting free. Springfield's residents are taking out three months' worth of pent-up frustration on the dome. Maybe they were too stupid to think of digging out initially, but by this point they're also too angry and tired to think of anything other than smashing the dome into a million pieces.

Because when the dome was placed over Springfield, the choppers twisted it down deep into the ground, far to deep for the people of Springfield to dig by hand.

1
Why was Kale Brecht under house arrest in the movie Disturbia?
5
Why don't they try digging in Under the Dome?
7
Why did Adam and Barbara have to dig up Beetlejuice?
8
How come the ground under Aragorn's army did not collapse after the ring is destroyed?
20
In The Simpsons, why did they kill off Maude Flanders?
2
Why did Katniss and Gale not run away when they had the chance?
12
Did Fox need permission for the 'Spider-Pig' parody in The Simpsons Movie?
4
Why did Syrena take Philip under water?
7
Why did Sharon not pay for the movie ticket?
4
Why did they not wear any mask to conceal their identity?