Is Mayor in Cloudy with a Chance of Meatballs inspired by this character?

Is Mayor of Amity from Jaws an inspiration for the mayor in Cloudy With A Chance of Meatballs?

I googled for it but didn't find direct evidence.

EDIT: I also noticed some interesting similarities in wardrobe and mannerisms between the earlier Jaws mayor and the later CWACOM mayor. E.g. the way they combine the colors of their shirt+jacket+ties. 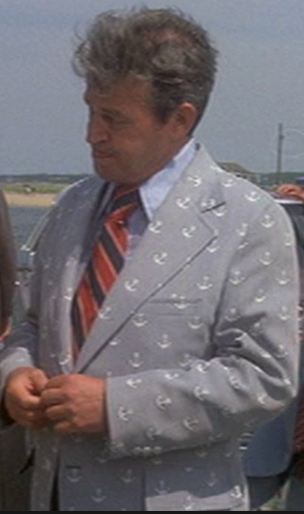 There is one tie that's worn by the Jaws mayor for a period during the movie that looks exactly the same as the rendered tie of the CWACOM mayor.

I guess we can only confirm how much inspiration the CWACOM mayor character took from the Jaws character if ever the creators of CWACOM see this post in this website.

PS: the more I look at the two ties, the more I think they are purposely the same pattern. :-)

Not directly I assume but the Mayor in Jaws was an early example of a Trope (indeed possibly the originator) but there are example of this throughout disaster-type movies where dire warnings are ignored by authority figures.

If you've seen a Disaster Movie or Monster Movie, you've seen this trope. There's an oncoming disaster and The Hero is trying to get everyone to see the Cassandra Truth. Problem is that there's this one Suit with Vested Interests in something that's going to suffer if the disaster comes about. He'll argue against people believing the hero or an Ignored Expert, he'll try to convince people that they are safe with his product, and he'll try to stop word from getting further so that the stock prices don't sink, all while the boat does.

In the case of Jaws, the mayor is downplaying any danger so as not to drive off tourists (see Attack of the Town Festival trope).

Not the answer you're looking for? Browse other questions tagged reference jaws cloudy-with-a-chance-of-meatballs .

8
Did Robert Redford name the Sundance Film Festival after the character he played?
5
Was the climax scene of Argo inspired by The Last King of Scotland?
8
Was 1970s Han Solo's name inspired by 1960's Napoleon Solo?
14
Was the incredible K-2SO inspired by an earlier kill droid, HK-47?
5
Why does the rat have wings in “Cloudy with a Chance of Meatballs”?
0
What is the book that Mayor Richmond references in The Killing?
3
Is GLOW inspired by a real-life show?
13
Is this character from Isle of Dogs an homage to Ran, or just a coincidence?