What's the reason for the decade jump in the recent X-Men trilogy?

In the recent X-Men trilogy (X-Men: Days of Future Past, X-Men: Apocalypse and X-Men: Dark Phoenix), they take place in the 70s, 80s, and 90s respectively. But why the 10-year jump when it was not really paid much storywise. It only increased the age confusion and raised memes like this: 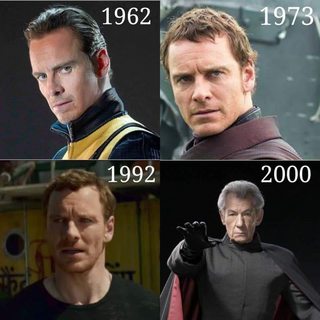 Is there any in-universe or out of universe reason for this decade jump?

To give the audience the sense of meeting the characters for the first time, in every movie.

From a 2014 interview with Simon Kinberg by Steve Weintraub for Collider on X-Men: Days of Future Past:

KINBERG: Yeah. One of the things, and this is an idea that came out of my work with Matthew Vaughn was, we didn’t want to do what most sequels do, which is pick up a day after or a month, or even a year after the last movie. We wanted to give it a big breadth of time so that you would meet these characters in some ways for the first time again, so we set the movie 10 years later than First Class ended and in doing that, part of my responsibility as the writer was creating a timeline so we can do exactly as you said, just give the actors a sense of who they’ve become and how they got there over the span of the 10 years we haven’t seen. And there’s a monologue in the movie that Hank has that Nick has, where he tells Wolverine essentially what happened. Wolverine comes to the mansion, he meets this broken, disheveled Charles Xavier and he says, “What happened to the Professor?” And Nick tells him what happened. “We started a school, it fell apart, he fell apart…” And all the things that happened over the last 10 years.

Since you mention the aging meme, Kinberg was asked about the aging in an interview on X-Men: Dark Phoenix with SyFyWire:

It's rationalization. Regarding Mystique, she can just make herself look younger, so essentially ageless. About the others:

But for all the other characters, Michael Fassbender, James McAvoy, Nicholas Hoult, going back to First Class, they certainly have not aged 30 years since we started making those movies 10 years ago," he acknowledges. "And the way that we sort of rationalized it, and it is a rationalization for sure, was that they aged a little differently because they're mutants, and we hoped that the audience would go with that. And so far that's not been a problem for the audience.

Specifically regarding the meme, X-Men (2000) is not actually set in 2000, but in "the not too distant future". It could be another 30 years after X-Men: Dark Phoenix and in a different timeline anyway, where he didn't escape solitary confinement in 1973 and lived a less active and healthy lifestyle.

The only dating in the original trilogy is that Magneto was a boy during WWII. Plausible outliers are that he was 10 then, and a spry 90 "now", giving a year of 2025. The Wolverine might constrain that a bit more, but continuity is very loose outside of the main films.

15
Has the continuity timeline been established for the new X-men movies?
5
What is the song playing on the radio in X-Men: Days of future past?
5
Wolverine in the river at the end of X-Men: Days of Future Past
10
Robots at the end of X-Men: Apocalypse
10
Why do the officers carry bows and arrows in X-Men: Apocalypse?
5
What was the reason for Magneto's decision at the end?
1
How does the timeline of Logan fit into the X-Men universe?
37
What's the difference between “men of violence” and “violent men”?
1
How do some of the X-Men come back in “Days of Future Past”?