Is HBO's Chernobyl accurate about the sequence of instructions causing reactor stall?

In the series finale of Chernobyl on HBO, Dyatlov orders Akimov and Toptenov to bring the reactor power down to 700 MW, as per the written test instructions, and then leaves the room without giving a different target. The reactor stalls as the operators try to stabilize at 700 MW because Xenon had built up from running half a day at half power, according to Legasov in the trial.

In his book Midnight in Chernobyl, Adam Higginbotham writes that

As soon as the Kiev grid dispatcher gave permission, the operators had resumed the reactor's long, controlled power descent and now held it steady at 720 megawatts -- just above the minimum level required to perform the test. But Dyatlov, perhaps assuming that a lower power level would be safer, was adamant that it be conducted at a level of 200 megawatts.

And this caused the xenon well / reactor stall.

So is Higginbotham's account accurate and the HBO show inaccurate? Removing Dyatlov's more blatant culpability as portrayed by Higginbotham doesn't seem necessary to heighten the drama. But perhaps Craig Mazin (HBO) removed some events from the sequence, to better fit them into a series of flashbacks from the trial?

The HBO show depicts events very close to the official soviet version of accident which was presented at IAEA meeting in Vienna in 1986 with Legasov as the head of the soviet delegation and which was used as the source for INSAG-1 report. As Legasov says in the show, many things they presented in Vienna were lies which put the blame on the operators to hide the fact that RBMK reactors were unsafe. Legasov was a deputy director of Kurchatov Institute which was an organisation responsible for this reactor physics. 6 years later, when a new report by a commission to The USSR State Committee for the supervision of safety in industry and nuclear power became available, IAEA published new report INSAG-7 in 1992, which is currently the most authoritative description of Chernobyl accident.

At 31:32 in the last episode they show control room with wall clock at 0:28 and power meter at 797 MW. In the real life, when Akimov shift started, the power was already at 720 MW (according to the log record at 0:05) and they were reducing power gradually to the range 400-500 MW. It is unclear why they were reducing power from 700 MW. Some insist that Dyatlov demanded this (eg, Fomin said this during trial but he wasn't present there and wasn't aware of what was going on) and Dyatlov himself denies this and says that Akimov was doing this on his own, due to some miscommunication, probably for another steam turbine test which was run before the final test. The original soviet version (INSAG-1) was that it was against the regulation to run the reactor below 700 MW, which isn't true. They also said that 700-1000 MW was minimum power level for the test while Dyatlov (who put this number into the test plan) says that it was maximum level for the test, as they couldn't handle excessive steam during turbine test. 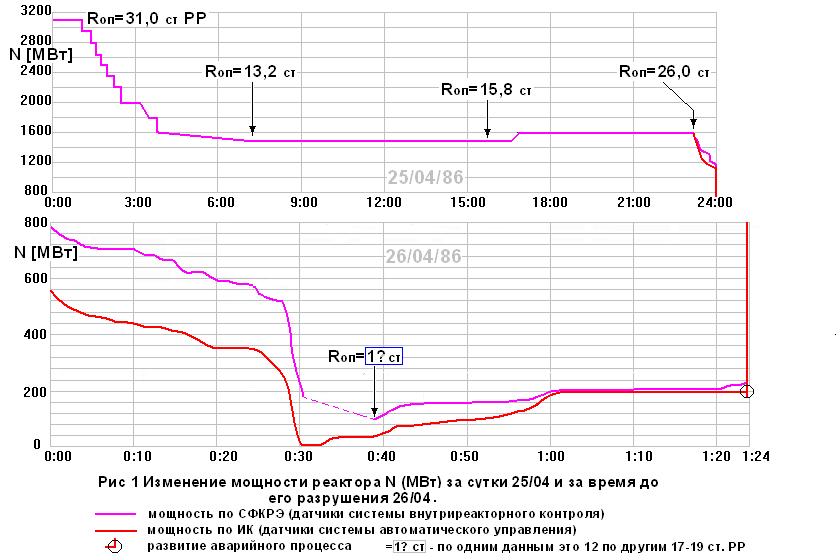 At 32:20 in the show the reactor power drops from 700 MW to 500 MW on its own. In reality this was controlled power reduction.

At 33:00 Akimov runs after Dyatlov. It didn't happen, Akimov was controlling reactor himself.

At 33:16 Toptunov switches from LAC to GAC, power drops to 30 MW. There is no indication about failure of GAC. Also Dyatlov was not present at the moment, he appeared few minutes later when Akimov, Toptunov and Tregub brought power to around 50-70 MW.

At 43:45 Akimov says that all they can get is 200 MW. As they had 17 equivalent rods of reactivity margin they probably could increase the power. From 0:41 till 1:16 they were running first turbine test which required to be run at 200 MW power.

At 44:31 Akimov says that the turbine is going too slow for the test to deliver any valid results. Metlenko, the engineer who developed the test plan for turbine, says at the trial that 200 MW was enough.

At 46:04 Legasov says that Toptunov at 1:22:30 sees a report from the computer system. In the real life computer did calculations but it was in a separate room and to get the report you need 5 minutes to get there. The reactor exploded in 2 minutes and the results were printed out much later using a similar computer at a different power plant. INSAG-1 and judges during trial make an accusation that operators had the result of this calculation and were aware that they were running with only 6 equivalent control rods which is against regulations.

At 47:00 Legasov says that at 1:23:05 pumps are shutdown and removes blue card marked Water. In the real the pumps were running even after the reactor exploded. With additional pumps turned on at 1:15 they even exceeded maximum limit of amount of water fed to the reactor and they were blamed in INSAG-1 that this could have caused pump cavitation and failure to feed water to the reactor.

At 50:35 they show Akimov pressing AZ-5 at 1:23:40 in panic (INSAG-1 says that reactor runaway started before they pressed AZ-5 and they tried to stop it by pressing AZ-5). In the real Akimov gave command with calm voice to press AZ-5 to shutdown the reactor as they ended experiment. This button is used for normal shutdown too and the last Chernobyl reactor was shutdown on TV by using the same AZ-5 button in 2000. But in 1986 power surge after pressing AZ-5 was so fast that recorder showed straight vertical line. They were supposed to press AZ-5 button at the same moment as they started test at 1:23:05 (it was done automatically during the same tests before). Calculations show that explosion would still happened anyway if they pressed it 35 seconds earlier. INSAG-7 report also says that it is unclear if explosion wouldn't have happened if they were running at 700MW as planned.

P.S. Criminal investigation against Akimov and Toptunov was closed only in November 1986, six months after their deaths.

Oops, should have checked Wikipedia first. According to Wikipedia, the HBO version seems more accurate than Midnight in Chernobyl. [https://en.wikipedia.org/wiki/Chernobyl_disaster#Conditions]

The test plan called for a gradual decrease in power output from reactor 4 to a thermal level of 700–1000 MW.[41] An output of 700 MW was reached at 00:05 on 26 April. Due to the reactor's production of a fission byproduct, xenon-135, which is a reaction-inhibiting neutron absorber, core power continued to decrease in the absence of further operator action—a process known as reactor poisoning

However perhaps there were conflicting accounts on this:

The exact circumstances that caused the power fall are unknown because Akimov died in hospital on 10 May and Toptunov on 14 May; early reports attributed it to Toptunov mistakenly inserting the control rods too far into the core, but it has also been suggested it was due to an equipment failure.[38]:11"

Not the answer you're looking for? Browse other questions tagged realism historical-accuracy chernobyl .

5
Was the depiction of George Méliès accurate to what we know about his life?
9
What do the truck's loudspeakers say in HBO's Chernobyl?
7
Why did energy level drop after switching to global automatic control?