Is the world in Game of Thrones spherical or flat?

In extension to this question about Game of Thrones, we know the map of Westeros and Essos which is in flat style.

Do the west of Westeros and the east of Essos connect?

Or is the map not completed yet? 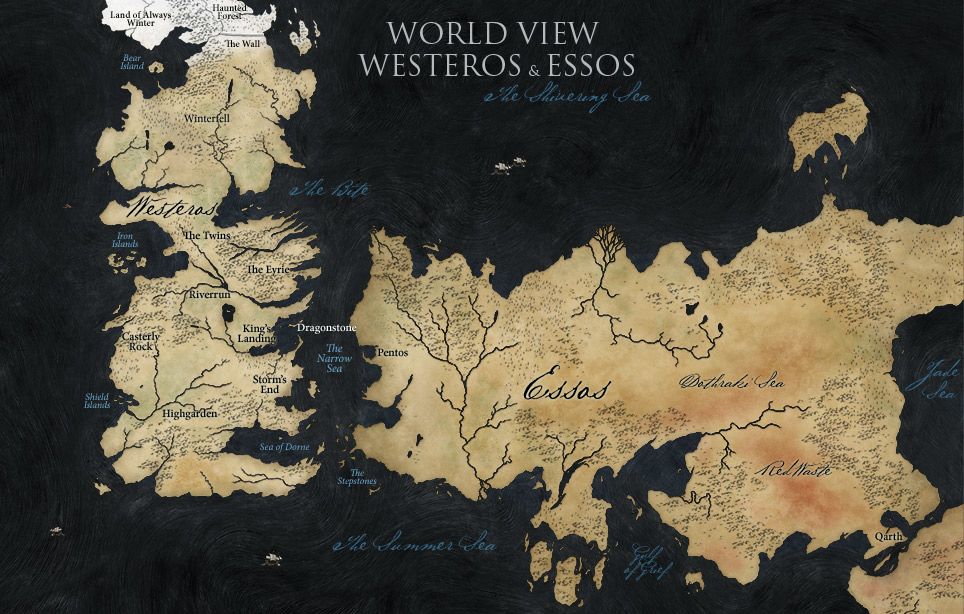 Answer from the show is we don't know.

No answer from the creator of the show and no hints are given in the show itself.

But Martin did answer this:

Question: Is your world round. I mean if Dany traveled far enough east couldnt she come to the other side of westeros?

Martin: Yes, the world is round. Might be a little larger than ours, though. I was thinking more like Vance's Big Planet.... but don't hold me to that - westeros.org

Also in books, there was Elissa Farman (speculated that Arya's arc is inspired by her) who did a similar journey:

Elissa always dreamed of sailing west to discover the strange and unknown lands never known to man before — which, again, was considered a laughable goal. Yet she made for a compelling enough captain to convince two other ships to join her daring journey beyond the edge of the world. Changing her name to Alys Westhill, she set sail from Oldtown on Sun Chaser, with the Autumn Moon and the Lady Meredith beside her.

Soon after, harsh storms took down the Autumn Moon, possibly with the help of a kraken. But Sun Chaser and the Lady Meredith indeed managed to sail farther west than anyone ever had before, discovering three new islands which Captain Alys named Aegon, Visenya, and Rhaenys.

Though Alys wanted to continue the journey, the Lady Meredith decided to take the new spices and goods discovered on the islands and turn back to Oldtown. So Sun Chaser's whereabouts fell off the map, along with Captain Alys Westhill.

Decades later, though, a famed captain and friend to the Targaryen family reportedly spotted Sun Chaser in Asshai. And that's huge.

Asshai is on the easternmost edge of the known map. So the most logical explanation for Sun Chaser winding up there would be if it actually did made it past the edge of the world to the west, circumventing the globe to arrive on the other side of Essos. - Mashable

But we never get to know in books what happened to Elissa and if she really made this huge discovery then why she didn't publish it or maybe she was afraid as she did steal 3 eggs (supposedly Daenerys's dragon kids) and might have died before making any revelation, we don't know and might get more information in future books.

30
What is to the west of Westeros?

28
Does the Game of Thrones intro change to reflect the current story?
21
Why are knights titled "Ser" in Game of Thrones?
5
Does Cersei know about the impending attack on Westeros?
2
Why is there only one Giant in the series
16
Do the sigils next to the names of staff in the Game of Thrones intro all exist in the fictional world?
7
Did the return of dragons in the world trigger the Night King to start taking action?
4
Is there a known reason for why D. B. Weiss was hired as showrunner for Game of Thrones?
4
Why is Westeros a bigger deal than Essos?
25
Why didn't Drogon attack this character?
30
What is to the west of Westeros?