Who is the daughter of John Spartan in Demolition Man?

In Demolition Man is it revealed what happened to John Spartan's (Sylvester Stallone) daughter? I know his wife died while he is frozen. But what happened to his daughter? Is she Lenina Huxley (Sandra Bullock) or someone else? Did I miss something or is it kept unrevealed?

Marco Brambilla, the director, mentions in the DVD audio commentary:

... a number of small scenes and a subplot involving Stallone’s character meeting his daughter, now considerably aged since his freezing, that were trimmed or entirely deleted, as well as a scene initially shot with Lori Petty playing Stallone’s female sidekick and love interest before she was replaced by Sandra Bullock.

According to the commentary found on the RC1 DVD, there were some scenes deleted from the movie including a subplot involving Spartan's daughter and the murder of Zachary Lamb by Phoenix. 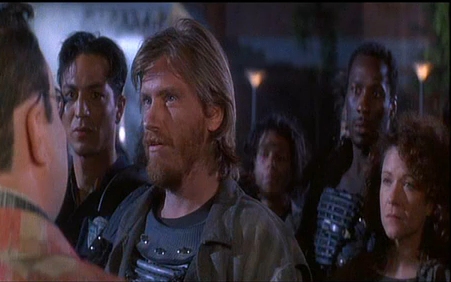 the woman on the far right is John's daughter.

Not the answer you're looking for? Browse other questions tagged character demolition-man .

18
What were the sea shells for in Demolition Man?
4
Why doesn't John Spartan know how to use the 3 shells?
3
How is George Stark related to the twin?
1
What was Tom's position about Daisy in The Great Gatsby?
61
Was Thanos really committed or just a hypocrite?
5
Can Barbossa be resurrected/saved?
5
Why does Skyler White leave home early and come back in the evening?