Why does Bran want to find Drogon?

In Game of Thrones S8E6, the following scene takes place

BRAN: And Drogon? Any word?

SAM: He was last spotted flying east, toward--

BRONN: The farther away, the better.

BRAN: Perhaps I can find him. Do carry on with the rest.

TYRION: As you wish, Your Grace.

Why is Bran so interested in Drogon that he feels he has to look for Drogon? For a king, that shouldn't even be in his priority list.

Drogon is capable of single-handedly wiping out an entire city in a reasonably short period of time. One of the strongest armed cities in Westeros (with weapons designed specifically for him) was devastated and leveled by Drogon.

He indiscriminately incinerated (yes at Dany's orders) men, women and children - military and civilian alike; there is no reason to believe that with Dany gone his ethics are going to be somehow purer than hers.

The woman who was like a mother to him is dead, along with his two siblings and he is now alone in the world.

They don't know what motivates him now that he is alone; Drogon may now pose the greatest potential threat in all of the known world.

Is he likely to come back to incinerate everyone? Are you going to wait till he is there to find out or are you going to keep tabs on him for the rest of his life?

There's nothing remarkable about wanting to know where a dangerous, possibly vengeful city-destroying dragon with unclear motivations has gone - but it's worth asking why did King Bran immediately leave the small council meeting to go dragon-hunting, instead of staying to discuss matters of state?

Bran showed no interest in anything else that went on in the meeting - and that makes sense. He has no interest in politics: even before the whole three-eyed-raven thing, he was more interested in Old Nan's tales of snarks and grumkins than his boring lessons about which house has what words.

Now that he can roam through time and space, he has even less interest in tedious debates about how much funding should or shouldn't be diverted from ship building to brothel repairs. Remember how he said it was by way of punishment, not reward, that he made Tyrion responsible for settling such matters.

"I need to use my powers to locate a dangerous dragon" is an excellent excuse to leave a boring meeting. I might try it at work...

A wild beast like a Dragon is a threat. But Drogon is quite the threat because he was angry of his mother's death. He could return anytime and avenge any time. This query is for safety of the realm.

Before this, he is talking about missing people.

Drogon was also missing. So, it might have flashed in his mind.

From writing perspective, the reason is giving whereabouts of a major character. Mentioning a characters who/which have fame in the audience is important. Otherwise, it would be a disappointment in the fans and many more questions like "Where did Drogon go?". So, that conversation also helped in letting the audience know the situation of Drogon.

As a the most powerful skinchanger we know of, it is possible Bran, as the Three Eyed Raven, might be able not only to find Drogon, but control him.

This potential control would have many benefits--Bran could use Drogon to protect the realm, ensuring an orderly transition to elective monarchy. (As many have noted, Dorne is sure to rebel at some point, never having been properly conquered in the first place.)

Even knowing where Drogon is would be beneficial--if the dragon is coming back to live in Westeros at some point, that would definitely impact the peasants in term of sheep population and the occasional human being eaten, per the dragons' time in Slaver's Bay.

From what I heard from NPR news today. They're going to be two or three spin-offs from Game of Thrones. Bran saying that he can find it leaves an open end to the series.

Extra open ends quoted: "Jon asks if killing Daenerys was right. "Ask me again in 10 years," Tyrion says, which at this rate is what George R.R. Martin should say when anyone grills him about The Winds of Winter." NPR news

Most likely Drogon is going to find a nice quiet place, where there is food, and live out the rest of his years. Bran can probably warg into him to see what is going on. I don't know if he could control him. He made the face of someone that was going to have a little fun being a dragon. He is still a kid, regardless of being the three-eyed raven. I believe Jon would be the only person in Westeros that could even hope to control Drogon.

While yes tactically, it is very reasonable to want to know where Drogon is, as he poses a potential threat all on his own, there may be other reasons this dialogue was included.

Azor Ahai was a legendary hero who wielded a burning sword called Lightbringer, according to tales from Asshai and followers of R'hllor. In some other cultures this warrior is called Hyrkoon the Hero, Yin Tar, Neferion, and Eldric Shadowchaser.

Some believe that the Azor Ahai Prophecy was fulfilled by Jon Snow being in the Azor "reborn" role and Dany, Azor's wife, Nissa Nissa...

Jon Snow: Necessary?! Have you been down there?! Have you seen?! Children, little children burned'! 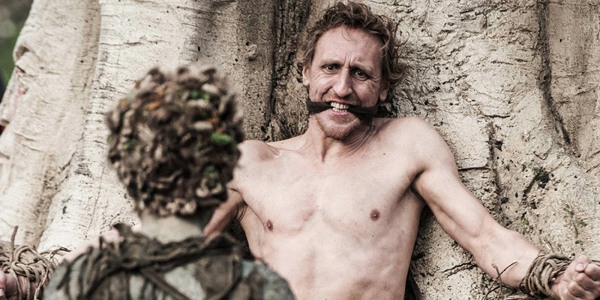 The idea of this prophecy relies on a belief of reincarnation and reenactment in order to undo some cycle started, presumably during the Age of Heroes, and presumably in relation to The Children of the Forest, betrayed by the First Men in relation to The White Walkers (and specifically for the TV series & upcoming prequel 'Long Night' TV series), and/or the creation of The Night King.

Daenerys Targaryen: [in Dothraki] Blood of my blood! You kept all your promises to me. You killed my enemies in their iron suits. You tore down their stone houses. You gave me the Seven Kingdoms! [the Dothraki cheer and Drogon roars. Daenerys turns to Grey Worm, addressing him in High Valyrian] You have walked beside me since the Plaza of Pride. You are the bravest of men, the most loyal of soldiers. I name you commander of all my forces, the Queen's Master of War! [the Unsullied stamp their spears in approval, while Grey Worm nods in gratitude] Unsullied. All of you were torn from your mothers' arms and made into slaves. Now...you are liberators! You have freed the people of King's Landing from the grip of a tyrant! But the war is not over. We will not lay down our spears until we have liberated all the people of the world! From Winterfell to Dorne, from Lannisport to Qarth, from the Summer Isles to the Jade Sea! Men, women and children have suffered too long beneath the wheel. Will you break the wheel with me?!

The first Long Night allegedly stems from events happening in regions around the Jade Sea, including a blood betrayl with the Opal Emperor of the Dawn Empire. This is also the region of, Yi-Ti, Asshai and the Shadowlands, a place where the legend or real life version of Azor may derive, a place where all manner of magic is experimented with, no matter how depraved, and some even believe, the place from which the first dragons are ever to be seen. Asshai also happens to be where Melisandre is originally from.

This Blood Betrayal, as it is known in the annals of the Further East, ushered in the Long Night, with the Maiden-Made-of-Light turning her back on the world, while the Lion of Night came forth to punish the wickedness of man. The darkness ended when a great warrior rose to lead the virtuous into battle with the sword Lightbringer in his hand. Light was restored, but the Great Empire was not reborn for the restored world was a broken place where every tribe of men went its own way, fearful of all the others, and war, lust, and murder had endured

So if we are to believe a cycle is broken, there may be good speculation in Dany's body being returned by Drogon to the lands from which this particular cycle started. (And why perhaps the writers had Dany name-drop the Jade Sea in her speech)

There is a possibility also that she could be resurrected for some yet to be disclosed purpose and following Drogon leads to those potential threats as well.

15
Why did Maester Luwin want Bran and Rickon to be taken to the wall in S02E10 of GoT
21
Why does Tyrion want to advise Daenerys?
27
Does Bran Stark know the truth about Littlefinger?
5
Why does Graves want to find an Obscurial so badly?
20
Why did the Night King want to kill Bran personally?
23
Why did Drogon do this?
25
Why didn't Drogon attack this character?
4
Can Bran see the future at will that people don't know about?
9
Why did Bran not warg into Drogon?
9
Why does Gus want the cartel to find Nacho?