Do the people of Westeros know who really poisoned Joffrey?

In Game of Thrones S04E02, "The Lion and the Rose", Joffrey Baratheon dies by drinking poisoned wine. The soldiers take Tyrion Lannister as prisoners and sentence him to death. Later he escapes.

In S07E03 it is revealed that it was Olenna Tyrell's plan with Littlefinger to poison Joffrey to avoid Margery Tyrell's wedding with Joffrey. Jaime Lannister says this to Cersei.

Even in the Game of Thrones finale, when Ser Brienne of Tarth updates the history of Jaime Lannister, it is written, 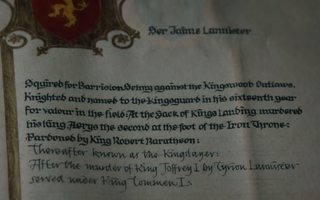 Do the common folk, Lords and ladies of Westeros or the seven kingdoms know who really poisoned Joffrey? Do they still think it was Tyrion Lannister?

No one knows apart from Jamie who later told this to Cersei. These two haven't probably shared this bit of information with anyone else (they definitely dont want to admit that they made a mistake). So the common folk mostly do not know .. and probably everyone still thinks Tyrion Lannister did it.

But the one person who does know the truth is Bran (if he knows he has to look for it - maybe if he does by chance look at Oleanna Tyrell's death eventually, he will come across their conversation and know Tyrion was not the reason for the murder of Joffrey).

If he does find out.. he would probably tell people if he deems fit that they need to know.. or surely tell Tyrion. If he doesn't find out, Tyrion will always be the kingslayer.

This is the only possibility of people finding out that Tyrion was not the kingslayer.

Do people of Westeros know it? I don't think so. Jaimie learnt it a lot later that it was not Tyrion, while he knew his brother was innocent, he still needed to know who it was who poisoned Joffrey to even tell someone that his brother is not guilty.

But as he came to learn that a lot later, when it didn't make sense, now that Cersie is the queen, there is no reason for Cersie to tell the truth to the other Lords and Ladies of the country, thus passing down the information to common folks. And if Jaimie tried to spread that information, which I am sure he didn't, that information would have been treated as false.

In Season 6 you saw how people in Essos had been already doing plays about the Purple wedding, so we can say it was already stamped into the minds of people everywhere that it was Tyrion, now no random source of information could have changed that.

Finally, majority of population died in the massacre of KL by Daenerys. So even if there were a handful who knew and cared, are no longer there, but now that in epilogue Tyrion is back as Hand of the King, I am sure he may make some corrections to past records and pass down the information he has about his history but we are not going to see any of it, the show has ended, what brilliant 9 years it has been.

9
How come Ser Loras is engaged to Cersei after being in the Kingsguard?
11
Are House Martell secretly Team Targaryen?
7
Is it common for kings to use their mother's house in titles?
13
Why did Tommen recuse himself?
11
Which kingdoms are in rebellion even after the Battle of the Blackwater?
4
Was Tywin Lannister involved in the murder plot?
11
Why did Renly consider himself King?
7
The Iron Bank of Braavos and Dragonstone!
12
Every man has fought against the Starks
6
Who are these lords at the council of lords?