How come Arya Stark wasn't hurt by this in Game of Thrones Season 8 Episode 5?

In S08E05 of Game of Thrones Sandor Clegane convinces Arya to leave the Red Keep and go home. There is a scene towards the end of the episode, right after Arya escapes the falling bell tower and ends up helping the woman and her child to escape, when Daenerys comes from the background towards them (woman, child, and Arya).

The dragon breathes fire on them, burning everyone - but later we see Arya stand from the ashes, un-burnt, even though she was clearly covered in fire. She proceeds to the white horse, which she rides out of King's Landing.

Why was she not burnt?

Does this have something to do with her killing the Night King?

For evidence that she was hit by the fire: Just look at this. She has clearly been covered in flames.

We see Arya stand from the ashes un-burnt even though she was clearly covered in fire... why was she not burnt, does this have something to do with her killing the Night king?

It was simply the camera angle that made her appear to be on fire.

By the time Drogon's flames reached the wall Arya was behind, she was already a couple feet past the corner and nearly lying on the ground. The licks of the flame that appear to be on Arya are really a few feet in front of her; it's simply the camera angle that made it seem like they were on her.

Consider the following series of images: 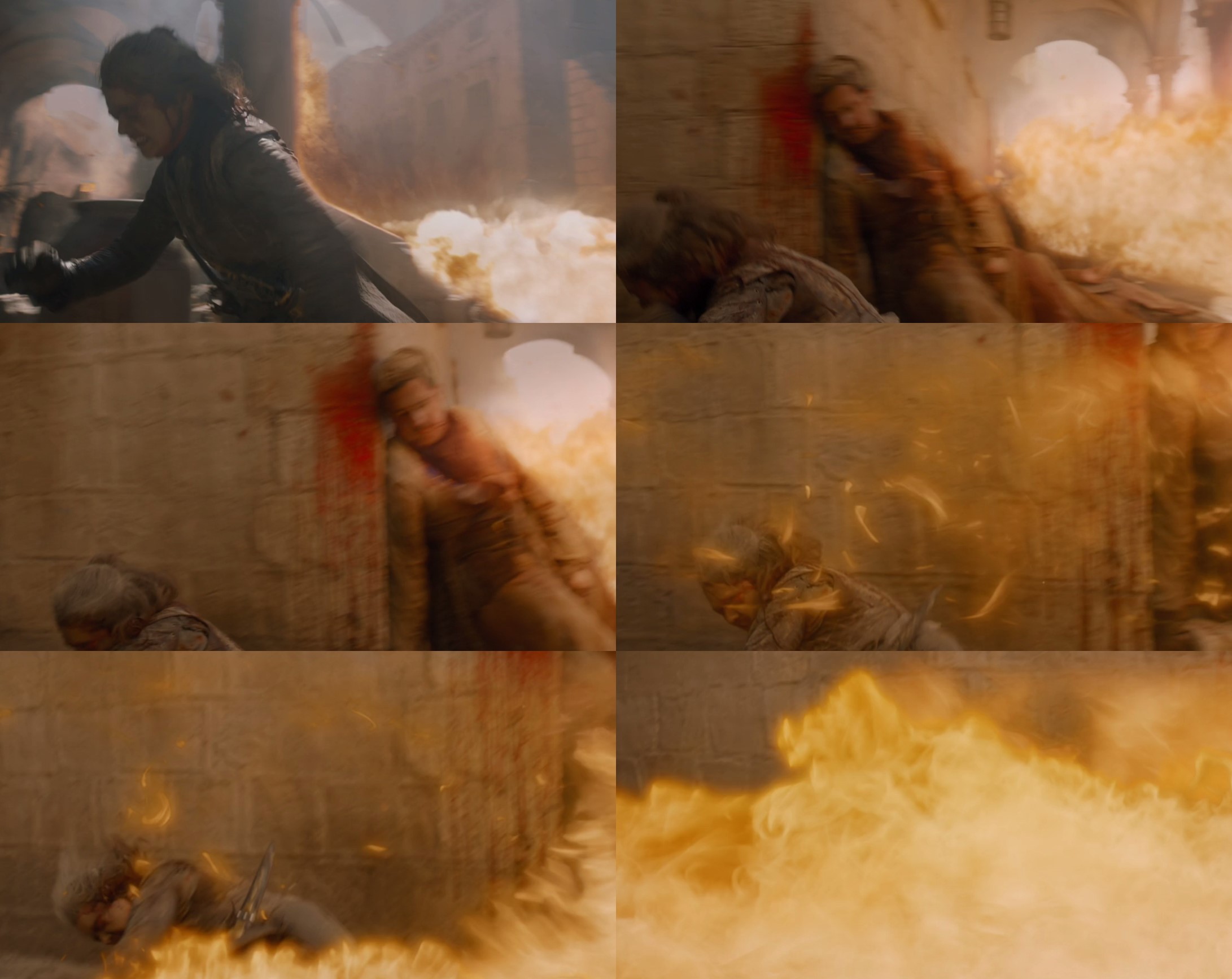 but just look at [this]..she was clearly covered in flames

If we zoom in on the wall Arya was behind, although the wall is blackened higher up, it's clearly untarnished by the flames towards the bottom (where Arya was lying down). 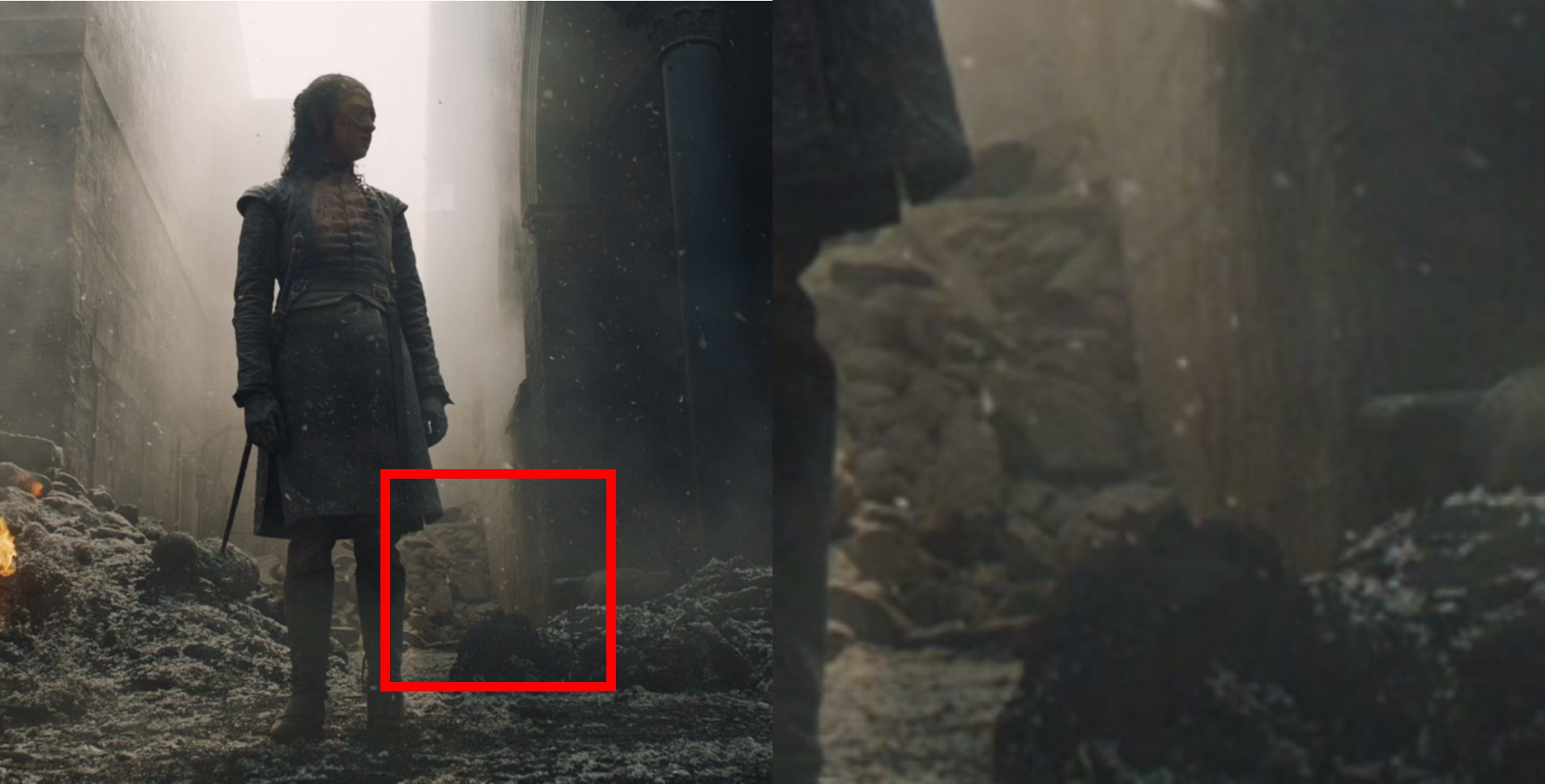 Having the flames appear to be on Arya was probably even done on purpose in order to add suspense. Since the scene immediately cuts away from Arya right after this happens, for several minutes everyone is left wondering if she got burnt and/or possibly even died.

You don't see Arya clearly covered in fire. You see Arya obscured by fire, i.e. there is fire between Arya and the camera.

Arya ducked behind a wall (IIRC of an alley). Flames tend to flow (I can't speak to real life but this is how they are shown in GOT), and thus don't quite cut a corner that sharply.

Here's a quick (and dirty) diagram of what I mean: 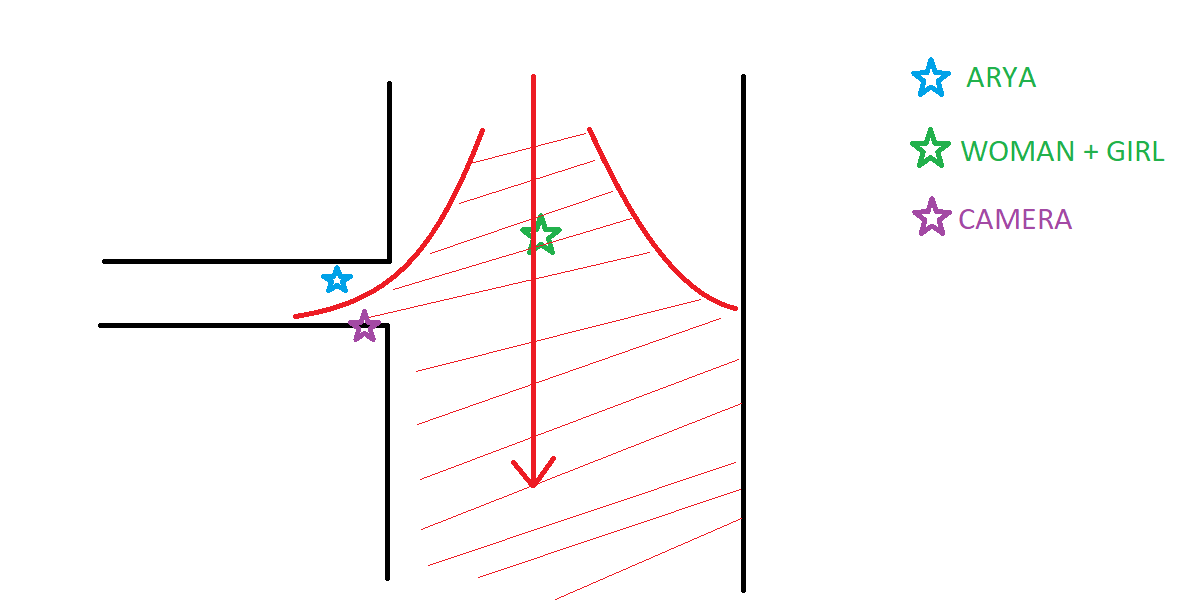 We can argue that people can get burns from being close to a source of heat without touching it (and a dragon's flame would certainly be hot enough), but that's not how it's usually portrayed on TV and in movies. Media tends to stick to the "you burn yourself by touching it" idea, which is not really realistic, but fairly commonly used and accepted as a trope.