Source of the Wildfire?

Despite the fact that Game of Thrones S08E05 puts Daenerys and her murderous actions as ultimately responsible for the apocalyptic sacking of King's Landing, there are many green flamed wildfire explosions visible throughout the episode. 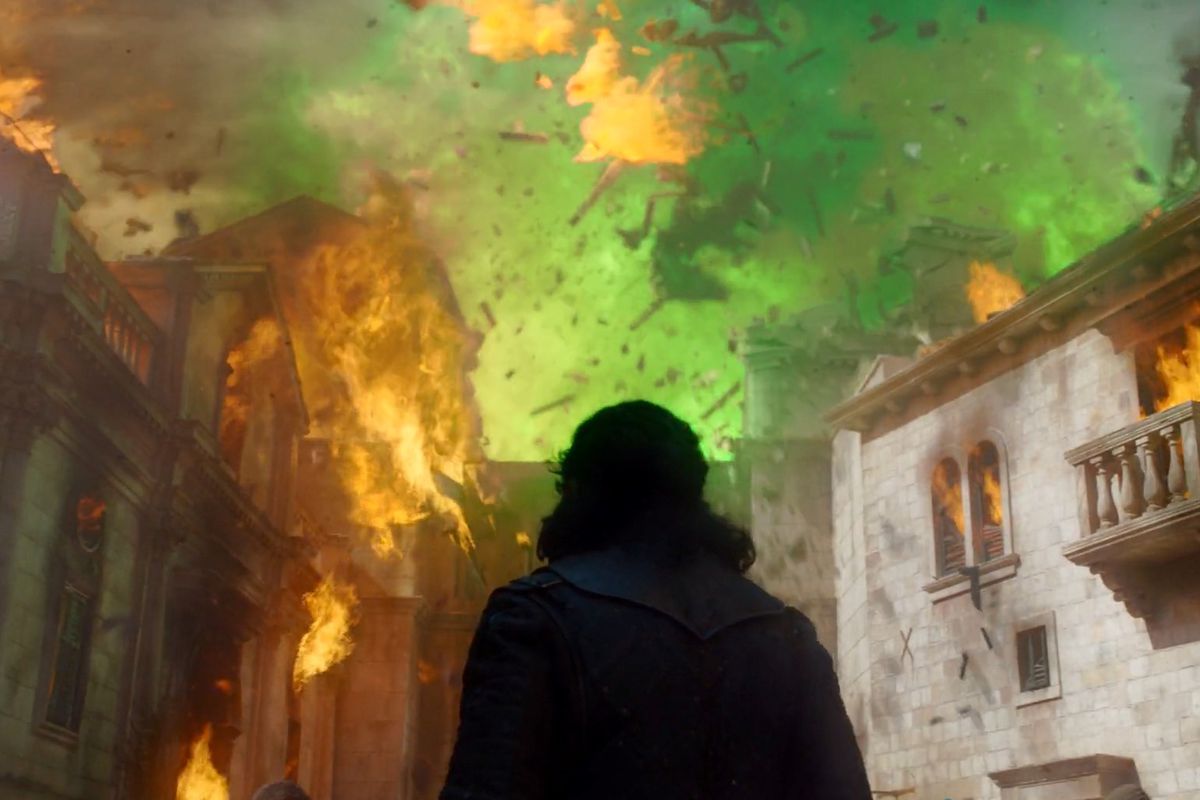 Are these the original caches that were planted by the Mad King or has Cersei been busy adding them to areas of the city for the purposes of defence, or, considering she has as little disregard for the captial's population as Daenerys does, out of spite's sake?

It's more likely to be remains from the Sack of King's Landing than you might think.

The Sack of King's Landing happens in year 281 while the current events of the show take place in year 305, so 24 years apart. Now it's been more than 70 years since the end of World War II yet many places (especially in Europe) still regularly find unexploded bombs from WW2. Now the total volume of undetonated explosives in WW2 probably exceed the wildfire stashes hidden in King's Landing by multiple orders of magnitude, but then again there's also been way more time and coordinated efforts to uncover the explosives, yet there are still thousands of tons uncovered as per estimations. It also might be the case that following the Sack of the King's Landing they managed to find some of the hidden stashes, but not all of them.

As stated in comments under Kepotx's answer, it is unlikely that anyone who knows the location of wildfire stashes survived the Sack of King's Landing. While Jaime knew about the fact that the Mad King was planning to set fire to the city, it's doubtful that he knew the exact locations of the stashes. Not only would the Mad King have no practical reasons to tell him (he could just order the Alchemist's guild directly), he also did not particularly trust Jaime and appointed him to Kingsguard to spite Tywin Lannister who he had grown paranoid of.

Also in S8E5 you see wildfire explosions evenly distributed throughout the city. Intent to spread fire quickly and cause as much mayhem as possible would explain that.

Now as for Cersei - it seemed like her general strategy for defense was to rely upon the scorpion fire to bring down the last dragon (she even says something among the lines of "We need just one good shot") and use the Golden Company to fight on the field just outside the city walls (by the way what is it with season 8 and throwing away your armies outside the walls?). Now would she spread out the wildfire around the city and use it as a trap defense? Maybe. But it would make more sense to use it to defend the walls, chokeholds (like gates) or maybe just for defense of the Red Keep.

Now the most important part.

Above is the logical attempt to explain the appearance of the wildfire. The real question is - what did the creators of the show intended by it, what storytelling purpose does the wildfire serve here to be featured so prominently?

In the case of Cersei placing it that would just be a secondary line of defense which is rendered useless in the actual sea of fire that happens. Which has a "meh" effect.
In the case of leftover stashes from the original Sack of King's Landing that would serve as symbolism of Targaryen return to the capital and show how Daenerys surpasses her own father the Mad King in cruelty and, well, madness by finishing what he originally intended to do, but could not.

So therefore I strongly suspect the wildfire explosions you see in S8E5 are from hidden stashes placed there by the Mad King with intent to burn down the city in the end of Robert's rebellion.

I doubt those are remainings of Aerys wildfire, It's way more plausible that it's Cersei's plan

First, Game of Thrones begins in 298AC, 15 years after the end of Robert's rebellion. This gives plenty of time to remove wildfire from obvious places. Not only wildfire is extremely dangerous, but it is also scarce, as only a few alchemists know the recipe. Also, remember that massive amounts of wildfire were used both during the battle of blackwater with Stanis, and to destroy the great sept of Baelor. It seems obvious that they would use previous stock of wildfire.

During the preparation of battle of blackwater, some wildfire is found beneath dragonpit, despite being in ruins for many years.

"No, no," Hallyne squeaked, "the sums are accurate, I swear. We have been, hmmm, most fortunate, my lord Hand. Another cache of Lord Rossart's was found, more than three hundred jars. Under the Dragonpit! Some whores have been using the ruins to entertain their patrons, and one of them fell through a patch of rotted floor into a cellar. When he felt the jars, he mistook them for wine. He was so drunk he broke the seal and drank some." "There was a prince who tried that once," said Tyrion dryly. "I haven't seen any dragons rising over the city, so it would seem it didn't work this time either." The Dragonpit atop the hill of Rhaenys had been abandoned for a century and a half. He supposed it was as good a place as any to store wildfire, and better than most, but it would have been nice if the late Lord Rossart had told someone.
A Clash of Kings - Tyrion XI

Another wildfire stock is found by Qyburn, beneath the Great Sept. If even the stock of wildfire under those buildings are found, I doubt that the stock inside more used buildings like stables remain undiscovered

Secondly, it doesn't fit the place where the mad king put wildfire

He saw traitors everywhere, and Varys was always there to point out any he might have missed. So His Grace commanded his alchemists to place caches of wildfire all over King's Landing. Beneath Baelor's Sept and the hovels of Flea Bottom, under stables and storehouses, at all seven gates, even in the cellars of the Red Keep itself.
A Storm of Swords - Jaime V

Finally, it suited well with Cersei's strategy. She allowed small folks to enter in red keep, so may Daenerys burn it, she would kill a lot of civilians. As it's obvious that once the main wall would be breached, the combat would follow on the street, she put wildfire there so Daenerys couldn't release dragonfire without hurting both civilians and buildings

1
Why did they choose Stevens to go into the Source Code?
1
Is this character development with Lui Kang accurate to the source material?
7
Did the Top Gear presenters really find the source of the river Nile?
9
Why did nobody know about the wildfire?
3
Funding Source?
20
How was so much wildfire made and then transported underneath the cathedral?
16
Why aren't there Wildfire weapons in Game of Thrones?
3
What is the significance of the FBI source saying 'John' Haldeman?
21
Why was wildfire not used during the Battle of Winterfell?
0
Why does removing Tony Stark's power source weaken him?