Why did Tyrion and others think King's Landing can't be taken without collateral damage?

Game of Thrones S08E05 showed us that Drogon can just fly around and destroy the Red Keep and the Iron Fleet, and the Golden Company can also easily be taken care of.

So why in the world has there been so much discussion about how they can't attack King's Landing since civillians will die, when it seems that Drogon is a precise and effective enough weapon to end the battle quickly with no, or minimial, collateral damage?

In the beginning of the episode, Tyrion even begs Daenerys not to do this, but her plan seems to be working perfectly well until she herself decided to willingly kill the innocent bystanders?

Drogon may not always be and effective and precise tool of destruction. He is not a spear which hits the target precisely, but shoots jets of fire, dragon fire that they have no control over.

"but her plan seems to be working perfectly well until she herself decided to willingly kill the innocent bystanders?" this is what they were afraid of. All of her counsel were always in awe/reverence of their queen until recently when they feel/decide shes no longer fit to be the queen

Their concerns come from a place of insecurity. They've seen their queen spiralling into instability, losing her kids, the dragons, her close aides Missandei and Jorah, almost half her army. Taking absolutely rash decisions. Had Daenerys been in a stable state of mind like in season 7, they might just have been more assured of Dany's decisions.

Daenerys's troubled and angered state of mind did very little to assure that Dany might just be reasonable or controlled in her actions. And riding a dragon over red keep, they were not assured was a good idea, keeping all of this in mind.

They have been skeptical of the queen and her actions since this season began. Doubting her every move, and calculating her every action.

In earlier seasons it used to be reverence

TYRION: But why provoke her? How is that in the best interest of your family, - or the North, or--? -

SANSA: You're afraid of her.

TYRION: Every good ruler needs to inspire a bit of fear.

VARYS: Do you think she wants to share the throne? She does not like to have her authority questioned.

TYRION: Something she has in common with every monarch who ever lived.

VARYS: I worry about her state of mind.

TYRION: We are advisors to the queen. Worrying about her state of mind is our job. 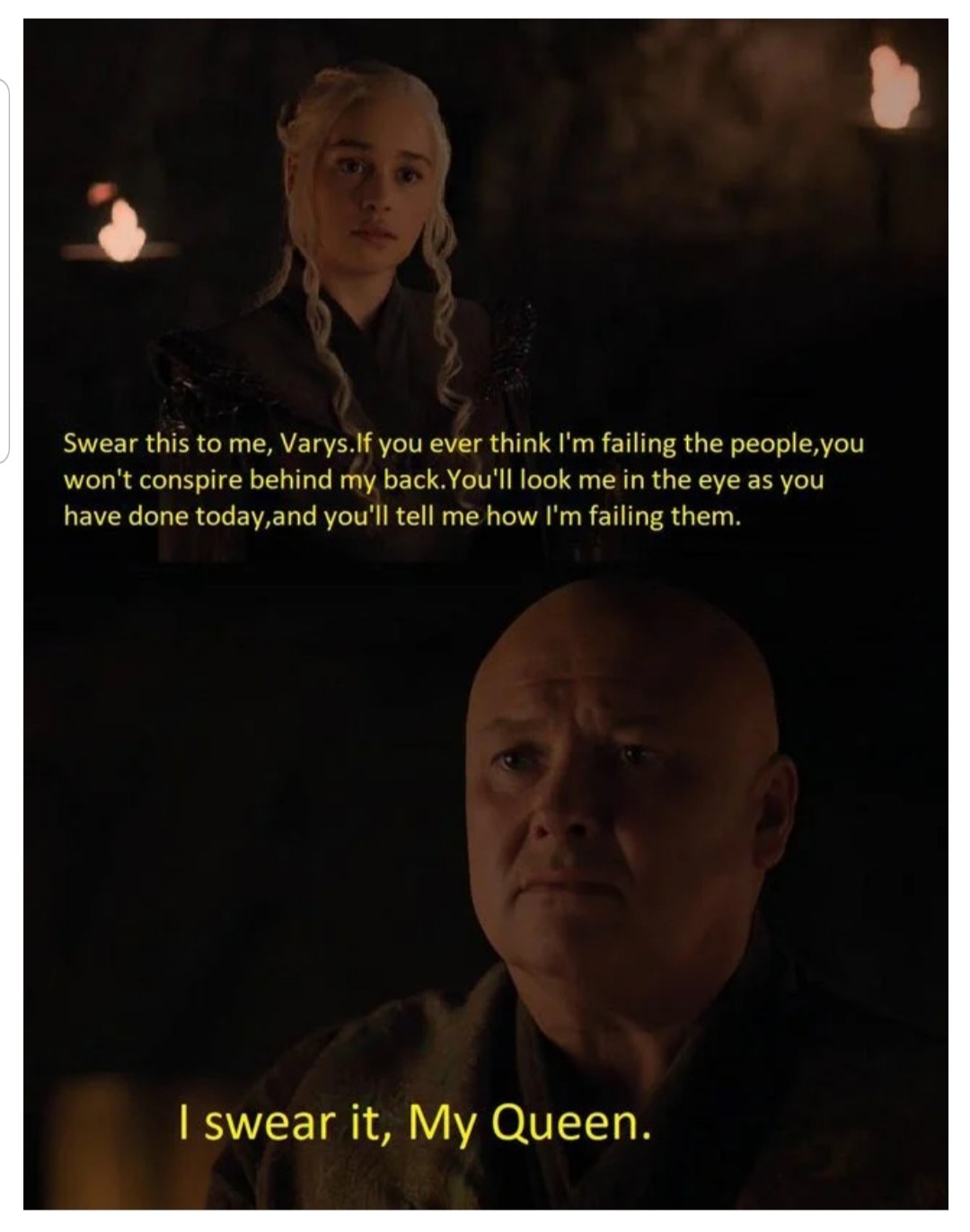 And when they actually say it's a bad idea :

Your Grace, I promised you I’d look you in the eye and speak directly if I ever thought you were making a mistake. This is a mistake," he says of her plan to Dracarys King's Landing. "Do not destroy the city you came to save. Do not become what you have struggled to defeat."

DAENERYS: Do you believe we're here for a reason, Lord Varys? I'm here to free the world from tyrants. That is my destiny and I will serve it, no matter the cost.

But perhaps it's good the people see that Daenerys Stormborn made every effort to avoid bloodshed, and Cersei Lannister refused. They should know whom to blame when the sky falls down upon them.

Dany knows, we know that the dragon can be as precise as it can, but to Tyrion, Varys and the others/her counsel, Drogon is a dragon which is being ridden by a very angry and unreasonable queen at the moment.

A jet of fire ejected, could spread like a wildfire and destroy more than intended or the entire red keep and its people.

That jet of fire could destroy the palace, and the rubble could landslide down into the red keep and the people sheltering in the red keep.

This is the chance that Tyrion and Varys don't want to take while trying to establish a new queen (a queen they vouch for) in King's Landing. Minimum/No Casualties, makes a great new entry of the queen and her aides into the kingdom. They don't want to take a chance with the dragon and its fire. Varys and Tyrion being on the highest of Dany's ranks, know how important it is for their queen to not hurt civilians while taking the throne from Cersei. They want to avoid mass killing intended or unintended.

The show clearly indicated that King's Landing could have been taken without collateral damage, specifically when the Lannister men-at-arms throw down their swords in surrender.

This is predicted by Tyrion, who states that once the enemy soldiers realize they can't win, they will surrender. The ringing of the bells is the sign of the surrender.

The havoc Dany wreaks on the city was completely unnecessary once the Iron Fleet, the Golden Company (in front of the walls outside the city), and the scorpions on the ramparts are destroyed.

Further, the sack of the city could have been much more humane. The producers stated that, once Dany's soldier see the queen indiscriminately destroying the city, they take it as a free for all, and start attacking and civilians indiscriminately.

(John Snow even kills an allied soldier attempting rape--in the books Dany very specifically prohibits her Dothraki from raping refugees, declaring that they should instead take the women as lawful wives.)

The indiscriminate killing of civilians by Dany is meant to illustrate how far she has fallen from her previous moral positions in service of her own interests.

Why did Dany do it?

The producers said she decided to make it personal, but Dany's words to Tyrion about mercy reveal the realpolitik goal: to show the power of even one dragon, and demonstrate unequivocally that to resist her rule means total destruction.