What is Thanos's weapon called?

In Avengers: Endgame, Thanos wields a kind of "double sword". I have no idea what this weapon is. 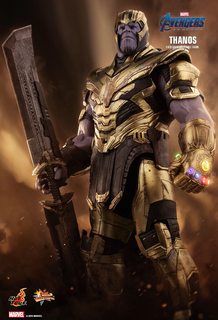 I'm wondering what kind of weapon this is, and if it has a name less clunky than "double sword". I saw someone online call it a "glaive", but that doesn't seem accurate.

Question: What is Thanos's weapon called?

marvel-cinematic-universe props avengers-endgame
Share
Improve this question
asked May 10 '19 at 15:51

What is Thanos's weapon called?

As of now, a name hasn't been given to Thanos' weapon

in the same sense that Thor's hammer has the name Mjolnir. So at least for now, we can only refer to Thanos' weapon using general terms, that being a double-bladed sword.

I'm wondering what kind of weapon this is

What we know so far

BD: First off, I have a really quick question. Did you make any decision of what his blade is made of? Because it was able to break Vibranium.

JR: Thanos is a thousand year old character who has fought everyone in the universe. He the greatest, he's the Genghis Khan of the universe, he would have the greatest weapon. He knows of Eitri, he's been to Eitri to have his glove created. Did he have them create his blade as well? Potentially. But it's interesting that it could destroy the shield."

What we don't know

I saw someone online call it a "glaive"

When I first saw it, it kind of reminded me of a crude version the Warglaives of Azzinoth, from World of Warcraft. But I don't know enough about blades/weapons to make the distinction of if Thanos' weapon (or the Warglaives for that matter) can really be classified as a glaive.

It's just a Double-edged sword

It doesn't have an official name or specific names like Mjolnir or Stormbreaker.

I was looking into this today and I can't respond via a comment to what Charles said based on Stackexchange's minimum credit system, but a glaive is simply a European polearm. I guess all glaives are polearms, but not all polearms are glaives (unless you're speaking English and using the term broadly). It was probably called a glaive because it looks like a double edged Asian weapon, similar to the Chinese guandao or Korean woldo.

Personally, I favour calling it a double glaive/polearm over a sword, based on its strong resemblance to those weapons.

Not the answer you're looking for? Browse other questions tagged marvel-cinematic-universe props avengers-endgame .

3
Which is the oldest non-fantasy movie to design unique weapon for the character?
6
What will be the next weapon of Thor?
6
Dagger-like weapon used by Kaecillius
29
Does Thanos's choice make any sense?
15
Did Thanos's calculations account for aftermath effects?
3
Was Mjolnir also Hela's weapon?
4
Which prior MCU films are specifically travelled to, or called out in Endgame?