Do Game of Thrones' crossbows and scorpions work in a realistic way?

Those of you who have seen Episode 4 already must be very impressed by the capabilities of medieval projectile weapons like crossbow and scorpion. However, I can't stop wondering if these depictions are anywhere close to reality.

In Episode 4, Bronn walks into a room with Jaime and Tyrion. During tense standoff, Bronn fires the bolt, and then reloads the crossbow, using one hand (not even full arm) in about one second. How that is possible?

Euron Greyjoy uses ship-mounted scorpion very efficiently against Dany's Rhaegal and later her ships. I didn't notice if his fleet had multiple scorpions, but even if it had, the whole encounter looks incredulous.

My understanding is that the above is very hard to do even with a modern rifle. For a scorpion, which fires projectiles at considerably slower speed, accurate targeting of a distant aerial target should be outright impossible. Euron could be a better marksman than Lee Harvey Oswald, but the weapon supposed to have its limitations.

Should I worry about those things, or just sit back and enjoy the show?

I have never fired a ballista, but I am a certified marksman, and firing on a moving target whilst being on a moving platform (ship in this case) makes things extremely difficult even for an expert shooter, and practice doesn't help much since ships always move erratically, and I doubt they had much practice with scorpions.

In my opinion, the odds of 3 scorpion bolts hitting the same target are impossible, and the odds of the ships not being spotted are equally impossible, no matter the altitude of the target, since the ships would need to break cover to line up a shot. It was simply another case of season 8 horrible writing.

I would suggest just sitting back and try to enjoy the show, even though the writing for this final season is making enjoying the show extremely difficult.

It seems very unlikely that the scorpion bolts could reach the dragons.

According to Popular Mechanics, the Scorpion is based on a real weapon, the ballista. As Wikipedia notes, the weapon was accurate (when mounted on the ground) but also had an effective range of only around 460m (for the later Roman version). Presumably that is when used as a siege weapon, i.e. against a static target on the same level as the ballista.

Trying to fire one from a moving ship, at a fast moving target in the air seems far fetched. If the ships were within 500m of the dragons they would surely have been noticed, and the additional requirement to shoot up at a high target means there is little chance of them having enough range.

It's possible that the Scorpions are extremely advanced and much more powerful than real-world ones, but this is undermined by the later parlay scene. The remaining dragon is shown to be around 4-500m from the rampart mounted Scorpions, but they don't take the opportunity to shoot it. Given that Cersei seems to have no intention of doing anything other than angering her opponents and is happy to use sneak attacks, there is no plausibly explanation at to why she doesn't kill Drogon there and then...

Or taking out Dany for that matter, given that these weapons are apparently quite high precision. Romans report using them against individual targets with some success.

No, the physics do not make sense. Since the arrows are reloaded by hand quite easily, they should not contain enough elastic potential energy to shoot an arrow that size with that speed and accuracy.

Two factors determine the amount of energy a bow can hold. Its draw weight is the amount of force required to draw the bow. A bow's draw weight increases the farther back you pull the string. Its draw length is the distance between the bowstring's position at rest and its position when drawn. The total amount of energy that a bow can hold is approximately equal to its draw weight times its draw length, divided by two. In other words, a bow's overall strength depends on how hard it is for you to pull the string and how far back you are able to pull it.

And from Is it realistic or possible to implement the loading mechanism of a shotgun into a crossbow? on Worldbuilding.SE:

You want to apply as much force as you can to the string. If you cock it with one arm, you will only have one half the draw weight you would have if you used two arms to cock it, so it will be a wimpy crossbow.

With that being said, Grand Maester Qyburn is an exceptional inventor and has even raised a person from the dead, also, he has been working on these scorpions for a long time. We know of special materials that have magical properties like valyrian steel, or wildfire; maybe the drawstrings for the crossbows are somehow enchanted or made with some magic to allow them to be so powerful. Even so, I don't see how that is possible without more reload effort unless the material is something so incredible that it doesn't belong in the GoT universe.

EDIT I'll change my answer from No to Maybe after watching season 8 episode 5. The episode explained more about the reloading process and gave a more realistic portrayal of the scorpions.

The Scorpions do not seem to behave realistically. They strike with more power, more range, and greater accuracy than seems plausible, especially when fired from a moving ship. The other answers have covered this.

As for the crossbow, remember that the crossbow shown is the one that Joffrey had made. Joffrey is older in the series than the books, but still probably 16 (?) at the time he his first shown with it. He uses a separate lever to load it but shows little effort in doing so, and also brags that he had it made to be easier and faster to load than the usual crank thus demonstrating he doesn't understand crossbow loading methods. Bronn is a strong physically fit fighter so it is not too implausible that he could load such a weapon with one hand and he is experienced enough to hide any discomfort that it causes him to do so. This does require that the cross bow be rather weaker in power than most real world crossbows, but it would still be powerful enough to kill unarmed targets from close range.

While comments above mostly mention the Scorpion, the crossbow is actually (loosely) based on the existing repeating crossbow 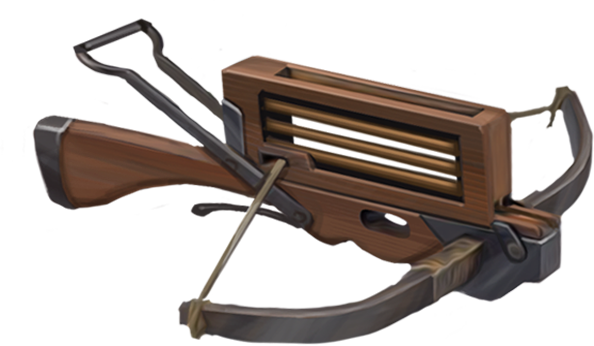 The repeating crossbow is a Chinese crossbow that was invented during the Warring States period, and remained in use until the late Qing dynasty. The repeating crossbow combined the actions of stringing the bow, placing the bolt, and shooting into a one-handed movement, thus allowing for a much higher rate of fire than a normal crossbow. [...]

Fired from the hip, the bolts were fired in sequence from pumping the corking lever forward and backward, arming and releasing in a continuous cyclic process until the magazine was emptied. This rocking action did not allow for precise firing, nor did the inability to sight along the barrel as in a crossbow or a modern gun.[4]

It was a crossbow that sacrificed range and the penetration power for MUCH higher shooting speed. The original invention was so easy to operate, that even "Confucian scholar or palace women" could operate it and indeed, it would often be shooting poisoned bolts/darts.

The repeating crossbow had an effective range of 70 meters and a maximum range of 180 meters. Its comparatively short range limited its usage to primarily defensive positions, where its ability to rapidly discharge 7–10 bolts in 15–20 seconds was used to prevent assaults on gates and doorways. In comparison, an arbalest could only deliver about two bolts a minute.

Larger repeating crossbows were used on ships and they lasted in service up until the time of cannons.