Why didn't Cersei kill Dany, Tyrion and the rest of the others?

In Game of Thrones S08E04 we see a face-off between Cersei and Dany. She could have killed Dany during the first meet before the great war also, but possibly didn't because she was terrified of her dragons.

But now as we know she has a weapon to kill the dragons and the backing of the people of the King's Landing, why didn't she kill them all?

When Tyrion and Qyburn walked out to talk, they both stopped at a very specific point, further apart than was comfortable to talk. Then, when Tyrion walked a certain distance past this point, Cersei's archers all responded and took aim, while his allies appeared shocked and concerned at the risk he was taking.

This suggests that the intention is supposed to be, that we (the audience) are supposed to understand that everyone is carefully standing outside of the other side's range. Then, Cersei's archers responded to Tyrion dangerously walking within range, giving Cersei the option of quickly killing him if she gave the order, which she chose not to (many good reasons here - not least that Cersei has observed that Tyrion's squeamish good nature can be manipulated and appears to be restraining or weakening Dany's wrath).

This is what you'd expect people in such a meeting to do. It's what we saw Dany do before outside of Mereen, where they all stood just outside of the range of Mereen's archers: 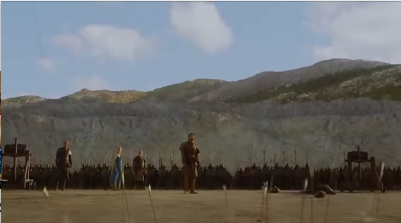 But they're not out of range??!

Of course it doesn't come across that way - and people are therefore asking questions like this - because they appear to be far, far closer than what we've seen before:

How do we explain this inconsistency?

Probably the same way we explain the presence of a modern coffee cup on a table - a mistake in a big, complex season where different episodes are directed by different people, different scenes are worked on by different teams at different times, and the scale has got so big, attention to detail has (presumably) started to slip.

One possibility is, the producers wanted Dany and Grey Worm to be clearly close enough to hear Missandei's last words and see what happens to her - and they felt it to be a worthwhile tradeoff, to sacrifice some consistency for a very powerful end-of-episode kick.

I don't know what I'd have done in their shoes, but I can imagine that if they'd had the distance similar to the earlier Mereen scene, we'd get questions like "How did Dany hear what Missandei said?" and "How did they know the prisoner was really Missandei?", with comments like "Plot megaphone and plot binoculars. Terrible writing".

(I'm not going to try to defend the inconsistency of the scorpion ballista things being overpowered, devastating long-range howitzers when mounted on a ship, but shorter range than an archer when not mounted on a ship, in the same episode... I can only guess that was a case of the director not managing the CGI team closely enough and letting them get carried away on the dragon-felling scene)

During the wide shot from the top of the ramparts, you can see that the dragon is much further than the rest of the Dani's guard. 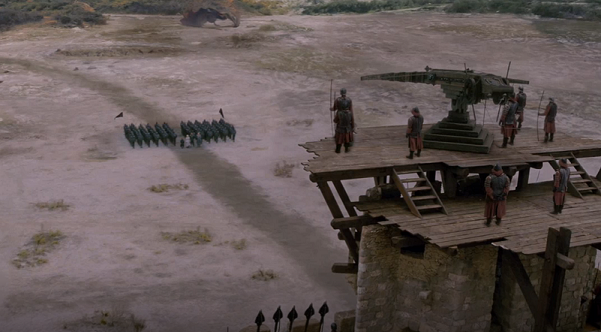 Presumably it's outside of the reach of the scorpions. The show doesn't make it clear how intelligent dragons are. When they are allowed to roam, they seem to behave like cats (they come and go as they please). It's not clear if they are less intelligent, more intelligent, or as intelligent as humans. Certainly, Cersei would not know this.

For all she knew, if she killed Dani, the dragon would wait for his chance.. maybe for weeks or months. But then it would attack, at night, and burn down the city.

This may also answer the question why Cersei had to kill Missandei. Just like in the Battle of the Bastards (when Ramsey killed Rickon), she needed to kill someone Dani cared about. This was done to draw the strongest forces into the fight.

Cersei can take on a dragon when she is prepared for it and has all the strongest defenses with her. She is not likely to fare so well if she is unprepared and the attack can come anywhere, at any moment, from a being which travels much faster than any of Cersei's own forces.

The look on Cersei's face after Missandei says "dracarys" is that of a self-satisfied smile. Her plan is working. She would much rather fight the fight where she is the strongest than have to fight against a guerrilla force with a dragon.

Some attribute it to "poor writing".

And yet, Cersei did not open fire on anyone. The most ruthless character in Game of Thrones acted with inconceivable honor, refusing to surrender, killing only Missandei, and agreeing to engage with Dany’s army on formal terms.

Considering we’re at the point where Starbucks cups are appearing on screen, we must acknowledge that things likely went this way because of careless planning and poor writing. There are more episodes to come—another major battle in the cards—and David Benioff and D.B. Weiss merely were not ready to end the war, even though victory seemed within Cersei’s grasp. For the sake of argument, though, perhaps we can be a bit more forgiving and at least attempt to explain Cersei’s actions.
[...]
Perhaps Cersei doesn’t shoot an arrow Dany’s way because she wants to win the right way? (Ya know, classic Cersei.)

There has been no official word on why she didn't, but it may be that she did indeed want to win the honorable way.

Possibly because Cersei wants to make Dany look like a villain by forcing her to kill innocent civilians and burn down King's Landing. This was a point of interest presented through various dialogue in three scenes. (Emphasis Mine)

Missandei: When the people find out what we have done for them, how we saved them-

Daenerys Targaryen: Cersei will make sure they don't believe it. We will hit her hard. We will rip her out, root and stem.

Tyrion Lannister: The objective here is to remove Cersei, without destroying King's Landing.

Varys: Thankfully, she's losing allies by the day. Yara Greyjoy has retaken the Iron Islands in her Queen's name. The new Prince of Dorne pledges his support-

Daenerys Targaryen: No matter how many Lords turn against her, as long as she sits on the Iron Throne, she can call herself Queen of the Seven Kingdoms. We need the capital.

Tyrion Lannister: I watched the people of King's Landing rebel against their King when they were hungry, and that was before winter began. Give them the opportunity, and they will cast Cersei aside.

Jon Snow: We'll surround the city. If the Iron Fleet tries to ferry in more food, the dragons will destroy them. If the Lannisters and the Golden Company attack, we'll defeat them in the field.

Tyrion Lannister: Once the people see that Cersei is our only enemy, her reign is over.

Cersei: Our message was well received then?

Qyburn: Your people would of heard the usurper is coming. They are grateful for your protection within the walls of the red keep.

Cersei: You're certain about the dragon?

Euron: I saw it sink beneath the waves.

Cersei: that must of been glorious.

Euron: The glory is yours, my Queen.

Euron: She's coming for you.

Cersie: Of course she is. Keep the gates open. If she wants to take the castle she'll have to murder thousands of innocent people first.

Tyrion: Qyburn, you're a rational man.

Qyburn: Or so I flatter myself, my Lord.

Tyrion: We have a chance here, perhaps our last chance to avoid carnage.

Qyburn: No, it is not a pleasant sound.

Tyrion: I, I don't want to hear it. Help me save this city.

Qyburn: My Lord, I am only a mouth-piece for our Queen.

I'm not sure what the official word for it is, but rulers will not fight when they meet to negotiate terms of surrender or anything of the sort, and it seems that it's one of the rare things that Cersei respects in terms of tradition. We saw the same meeting happen when Jon Snow met with Ramsay Snow, earlier when Stannis met with Renly. Then it happens when Jon asks for Lannister support against the Night King. In any one of those meetings, one could have attacked the other, but they didn't. It just happens to be one of those traditions where no one attacks to negotiate or demand surrender.

Succinctly explained by a Redditor u/Drummles

To my understanding, Cersei is fighting two wars. The first is against Dany, and the other is against the people of King’s Landing who could reject her sovereignty at any moment. By killing Messandei, she’s trying to provoke Dany because she sees potential for her to become like her father and burn innocent people. This is also why she’s bringing innocent people to the Red Keep. She’s not betting that the presence of the people in the Red Keep is going to stop a vengeful Dany from attacking King’s Landing, in fact she’s betting on the opposite. I think that Cersei wants Dany to take innocent lives, so that when Cersei defeats her the people will remember who saved them against “The Mad Queen.” I think she hopes that it will compensate for her evil acts such as blowing up the Sept. By waiting to kill Dany then rather than killing her now, she’s trying to maximize her gains. It’s certainly dangerous, but Cersei doesn’t really care about anyone but herself anyways.

We already see that Cersei is bringing people inside the Red Keep as bait/shield against Dany's Mad Queen tendencies. We also see Tyrion & Varys advice several times to Dany to be cautious & not use dragons & kill innocent people. Because if she does she will not break the wheel but simply turn it. She will not be better than those that came before her.

Tyrion also mentions how people of the city hate Cersei's rule & will try to overthrow her the 1st opportunity they get. So, Cersei is planning to save the day.

Cersei is playing the long Game of Thrones which you either win or die.

The only thing that makes sense to me, is that Cersei want's to make Dany look like the real villain and have her attack. This way she can manipulate the people to think that she saved them all from the evil dragon queen.

This would also explain why they did not finish them off while they were in the water earlier in the episode.

Sure it's a big risk, but she wouldn't mind that I guess.

It could also just be attributed to bad writing, however it's not very clear so for now it's a "we can only speculate".

9
How did Daenerys manage to turn up at King's Landing