Was there a dinosaur-counter in the original Jurassic Park movie?

I remember seeing Jurassic Park when it first came out. And I remember a scene describing a counter that kept track of the number of dinosaurs, so the operators could detect escapees. I remember the sense of doom when, in a later scene, they realized that it had been clamped to the expected count, and when unclamped, showed the true, larger number of dinosaurs (due to their breeding).

I've seen the film a few times since, and it has dawned on me that the scenes don't appear - verified it the other day, in fact. And searching the web, the sole reference is in this answer - which suggests the counter only appears in the novel.

I did read the novel once. Was this scene in any original version of the movie, or has my imagination painted in the gaps?

Only in the novel.

Searching subtitles from different versions of the released movie (from DVDRip, to BRRip, to Collector's Edition, to those old XViD RIPs that came in 2 CDs), I cannot find any reference to the counter.

However, in the novel, it’s a major plot point

“Everything accounted for, as always.” He couldn’t keep the satisfaction out of his voice.

“Now then,” Malcolm said. “Can you have the computer search for a different number of animals?”

And eventually, they reach the actual total 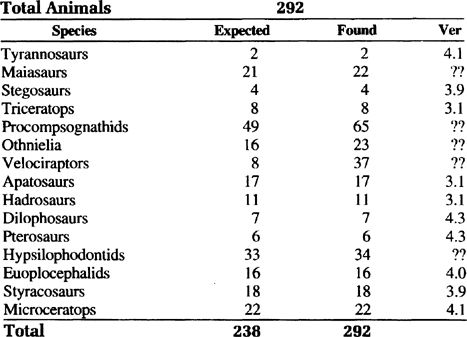 This part of the novel has not made it into movies, as far as I can tell. It appeared in the early script drafts, as you can see here:

MALCOLM: Of course I'm right, I'm always right. And while you're at it, search for 300 animals.

HAMMOND So! My kids are out there!

But it doesn't show in the first draft (also here), or in the final script (also here). It is also not listed as a deleted scene (also here). As far as I can tell, you remembering it is just a trick of the mind.

8
Why is the breeding aspect important?