What happens to Arya's new weapon?

We see Arya use her new weapon in Game of Thrones S08E03 effectively during her fight with undead at the wall, but once she was hit and retreated to the library we see her using a normal dragon glass dagger or what it looked like and not her special weapon. Even in the final scene,

In the fight with the Night King we see her using the valyrian steel dagger of Bran Stark's assassin.

Nowhere in the episode we see her weapon again. Do we know what happened to her special weapon?

Specifically, she loses it in the dive over the wights on the stairs inside the castle - timestamp approx 40:50

She's clearly holding it most of the way down, but she lands without it and she's not seen to be holding it after that. She leaves that doorway empty-handed.

In the library, she picks up a dragon-glass dagger from the floor, which she subsequently loses as she crashes through the door being attacked by another wight. She doesn't have that when Dondarrion rescues her.

Arya seems to lose her weapon - or, at least, the shaft - at the moment she is overrun by wights in the closed spaces of the castle.

The following scene, in which Beric Dondarrion tells Sandor Clegane ('The Hound') they should keep fighting the undead, Beric points to Arya on one of the castle's roofs, as she is trying to escape her pursuers. Here Arya already has lost her special weapon. We don't see it return throughout the episode.

Leaving it behind obviously make sense, though, because the efficient use of her custom weapon requires range, and is not made for stealthy kills: 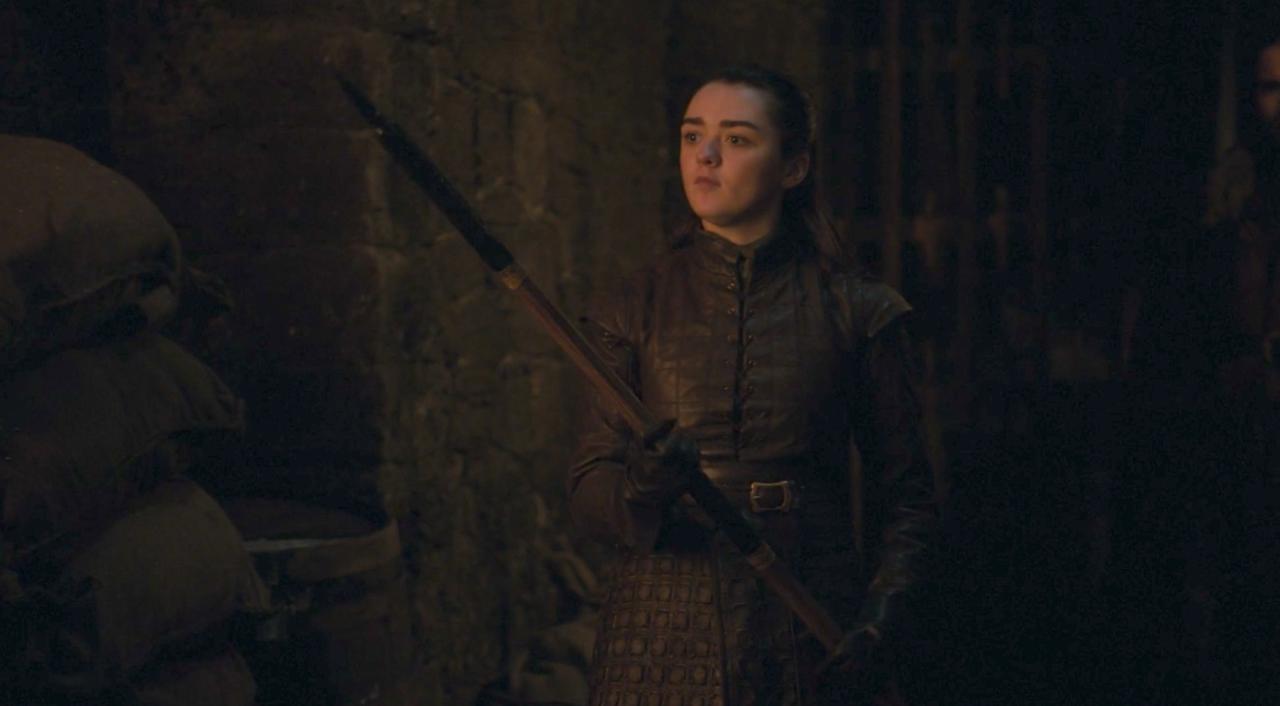 We don't see her wielding her new weapon after the siege of Winterfell because it would be inefficient in the castle's interior.

In the library, like in other close quarters, she doesn't have the necessary range to perform her preferred dance-like fighting style, wielding a light medium range weapon, the kind of weapon she is accustomed to fight with ever since Needle. Moreover, the length of the blade alone, as can be seen in the image above, would be too cumbersome for quick and silent kills.

24
What is Arya's weapon design?

4
How useful are dragon glass arrow heads when fighting the white walkers in Game of Thrones?
19
Is the Waif wearing Arya's face?
24
What is Arya's weapon design?
17
What is Bran doing in S08E03?
59
Why is Arya visibly scared in the library in Game of Thrones S8E3?
24
How come the armies suffered far less casualties than presented in the Battle of Winterfell?
4
How can the Unsullied form a new House?
5
What happens to Unsullied after this death?