How many Tarantino films are set in the same universe?

Tarantino is an odd figure, creating actual Universes for each of his characters that all tie into one another somehow.

They are broken up in a few categories including the Realer than Real Universe which include his history-altering pieces like Basterds where these people are supposed to be living in a real world, as in the way Hitler was offed in this Universe, as far as the people in Pulp Fiction are concerned, actually happened.

Then, we have what he refers to as the Movie Movie Universe where these movies are movies that the characters in his Realer than Real Universe can go see at their local theatre.

An interesting theory that has come of this is that Mia Wallace from Pulp Fiction could actually be playing The Bride - Beatrix Kiddo in Kill Bill, as she did attempt an acting career before and the Fox Force Five failed pilot has a lot of similarities to Kill Bill

In a matter to complicate things, it has been stated that he has characters than can crossover these borders to be in both universes; supposedly Winston Wolf as well as a lowly guard Earl McGraw meet this criteria.

Are all a part of the Movie Movie Universe

This image, shows a great visual connection of all these movies...though it is a bit outdated. 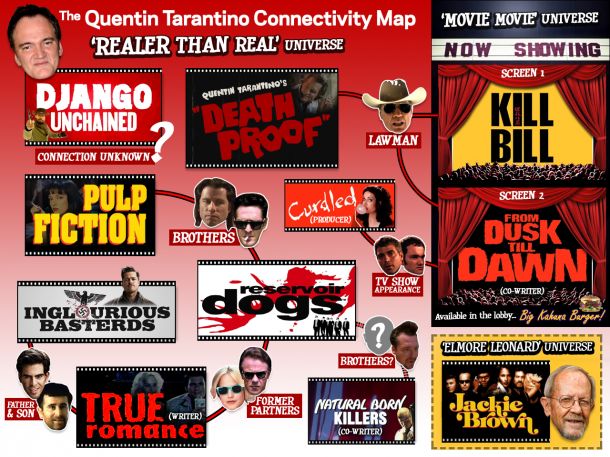 Chronological order of the films:

Not the answer you're looking for? Browse other questions tagged quentin-tarantino .

10
Does "The Hateful Eight" belong to the Tarantino Universe?
24
Who was the girl in Django unchained?
5
Is Mia Wallace (Uma Thurman) from Pulp Fiction the same person as The Bride in Kill Bill?
14
Do all of Quentin Tarantino's movies have a common underlying theme?

21
How does Quentin Tarantino write dialog for a language he doesn't speak?
5
How was the whipping scene accomplished in Django Unchained?
19
Which are Tarantino’s eight films?
10
Does "The Hateful Eight" belong to the Tarantino Universe?
5
Is Quentin Tarantino's scene in Pulp Fiction meant to feel different from the rest of the movie?
4
What are the 5 American western films that deal with slavery according to Tarantino?
5
How did Tarantino choose the song "Little Green Bag" for Reservoir Dogs?